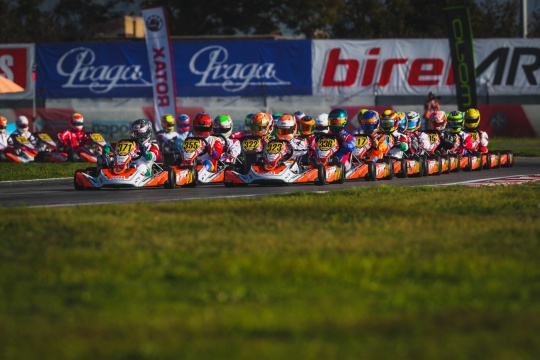 Author: Vroomkart International
Great show on the day dedicated to the finals on the international circuit of Sarno, where the new champions were decreed.
MICRO MAX - Race full of surprises in the Micro MAX, where the New Zealand driver Jay Urwin triumphed, first under the checkered flag by only 18 thousandths on Macauley Bishop. Third was Portuguese driver Salvador Trindade, author of an extraordinary comeback of 25 positions.

MINI MAX - Same story in the Mini MAX, where the leading trio gave an incredible show, thanks to the continuous reversals in front in the top positions. The French Jolan Raccamier got the better of his rivals, second his compatriot Andy Ratel, the Australian Costa Toparis third.

JUNIOR MAX - Neo Zealand  still on the top step of the podium, this time thanks to Clay Osborne, who despite an opaque first phase, managed to win with a textbook pass on Charlie Wurz a few turns from the end. Second step of the podium for Sacha Maguet, third Jason Leung.

DD2 - Petr Bezel ends a perfect weekend with a deserved victory, maintaining the leadership of the race until the end.
The French Nicolas Picot, second at the end of the race, not enough to win the title. Third Xen De Ruwe.

DD2 MASTER - Roberto Pesevski, with an incredible comeback of 9 positions, established himself on the French Rudy Champion. The star of the weekend finished third, the Argentine Matias Rodrigues, slightly in difficulty.

E-KARTS THUNDER - The championship dedicated to electric karts ended with a victory by the Swiss Jasin Ferati.
In the final2, the Swiss driver imposed himself on the Brit Bradley Barrett and the German Joel Sturm.
Ferati is the new DEKM 2019 champion.