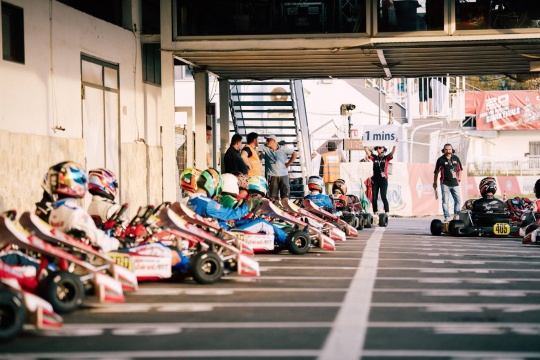 Author: Vroomkart International
The Prefinals have recently concluded at the Sarno International Circuit, which have officially established the starting grids for tomorrow's finals.
MICRO MAX - Among the youngest drivers, it was the American Adam Brickley who won the prefinal, managing to detach the rest of the group with a good margin, thanks also to the help of Jay Urwin, second at the finish line and behind by just one tenth. The pursuers are further back, thanks to plenty of infighting in the early stages. In the final, the American starts from pole, with Urwin second, Jaxson Burns third.

MINI MAX - French 1-2 for the Mini Max, where Andy Ratel and Jolan Raccamier came first and second. The two played as a team to defend themselves from the rest of the group, maintaining a consistent safety distance. In tomorrow's final, it will thus be an all-French front row, with Ratel in pole position, alongside Raccamier, while Dutch driver Jayden Thien is third.

JUNIOR MAX - Two pre-finals were disputed in the Junior Max category, where in the first it was Polish Oli Plyka to prevail, while in the second the Canadian Jason Leung won. The Polish driver thus starts from pole tomorrow, with Austrian Charlie Wurz at his side. Focus on New Zealander Clay Osborne, third at the start, who will surely give a hard time to the leading pair.

SENIOR MAX - Same script for the Senior MAX, where in the prefinal A it was the British driver Clayton Ravenscroft who won, thanks to his excellent pace. Prefinal B to Briton Rhys Hunter, tailed by the American Ryan Norberg. In the final of tomorrow the German Vincent France will start from pole position, in second position Ravenscroft, in third Oakley Pryer.

DD2 - In the gearbox category, the French driver Nicolas Picot, able to make the most of the start from the front row, won pre-final A. Extremely fought Prefinal, which saw Italian Luca Munaretto triumph. In the final, a 3-way race is expected with the Czech Petr Bezel on pole, second Picot, third Munaretto.

DD2 MASTER – Perfect weekend so far for the Argentine Matias Rodrigues, who, with the victory in prefinal B, has rightly earned the start from pole in tomorrow's final. Prefinal A went to French driver Rudy Champion, but due to a few penalties too many, he will start in 4th position tomorrow. Next to Rodrigues, Henrijs Grube, while Eriks Gasparovics is third.

E-KARTS THUNDER - In today's pre-final 2, the Swiss Jasin Ferati, with Luka Wloemer, third Jie Kao, wins with more than a second ahead of second place. It will therefore be the Swiss driver to start from pole position for tomorrow's final 2.