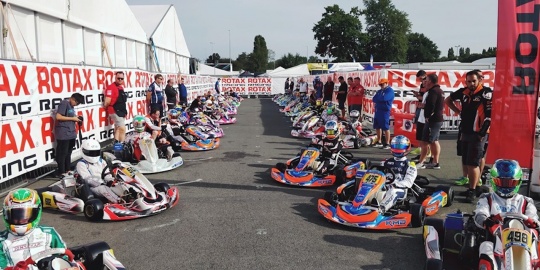 The first verdicts emerged on the slope next to the famous Circuit de La Sarthe, where the Le Mans 24 Hours is celebrated every year.

Junior - Strong start for the Dutchman Mike van Vugt (JJ Racing), who set the fastest time and earned leadership in group A for the heats. Van Vugt's time was 4 tenths faster than Oli Pylka’s one (Dan Holland), who will be seeded in group B. In the other four groups Sacha Clavadetscher, Ryan Shean, Florian Rousseau and Theo Antonio Kekati (Brand Racing) will be respectively the leaders.

Micro and Mini - For both classes the fight for pole position is scheduled for tomorrow. In the last free practice session of the Micro, the Austrian Nando Weixelbaumer (KMS Europe) set the best lap while in Mini Augustin Bernier, reigning World Champion OKJ’s brother, is on top.

DD2 and DD2 Masters - As for the smaller classes, even for the shifter classes the challenge for the pole is postponed until tomorrow. In the last free practice session the last winner of the Rotax MAX Challenge Grand Finals Paolo Besancenez was the leader in DD2 and Roberto Pesevski (KSCA) shined in Masters.