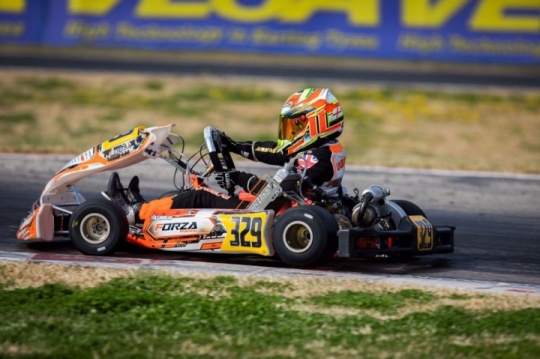 Author: Vroomkart International
Friday qualifying starts the third round of the WSK Super Master Series. On the La Conca circuit, all the 60 Mini, OKJ and OK drivers were set to challenge the stopwatch.
60 Mini - Irfan returns to the fore
Numerous as usual, the 60 Mini class features plenty of fierce competition right from Friday's start with six pole positions assigned: from group A to group F. Coskun Irfan returns to form at La Conca with the best time of 52.377; behind the Brit, four Italians namely Matteo Bagnardi, poleman of group B, Manuel Scognamiglio and Antonio Apicella for groups C and D. The last two pole positions were snatched up by Ean Eyckmans and Nikola Tsolov, respectively fifth and sixth overall. Uphill climb for Powell and Al Dhaheri with P8 and P20.
Meanwhile, Al Dhaheri, Macintyre and Tsolov grabbed wins in the first three races run.

OKJ - Lindbland tries to go solo
Open war also in the Junior class with the usual frontrunners and some new entries ready to have their say. Forza Racing driver Arvin Lindbland amazed the competition by bringing home the best lap time in 46.499, a performance that leaves Jamie Croxford's team hoping for the best. In second place, poleman of Group B Andrea Kimi Antonelli will certainly try to follow up on the performance in Lonato; third, American Ugo Ugochukwu (pole group C). Marcus Amand and Tymoteusz Kucharczyk took the last two poles, respectively with the fourth and fifth overall times.
In OKJ, the first results saw Ten Brinke and Antonelli with a win each in the first two direct matches.

OK - Patterson starts strong
The event's top class starts with plenty of question marks left after the second round of the series. The winner of Lonato, Dexter Patterson, has already started to put pressure on the direct rivals with the best time trial in 45.291, valid for the pole position of the first group. In second and third position, Taylor Barnard and Gabriele Minì try to keep up with the leader, ahead in group B and C. Tony Kart driver Noah Milell takes the last pole available. Further back, Dino Beganovic and Lorenzo Travisanutto manage P11 and P19 absolute times.
In the day's double heats, wins by Patterson and Valtanen.

Next appointment is for tomorrow, Saturday 9 March, with a full program of direct matches.