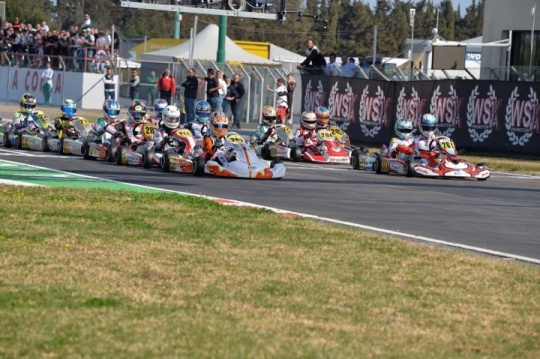 Author: Vroomkart International
Muro Leccese greets the third round of the WSK Super Master Series with the finals now run. The winners at La Conca: Minì (OK), Antonelli (OKJ) and Powell (60 Mini).
After the pre-finals of the morning, the Apulia afternoon featured plenty of combat and surprising turns of events for the public on the track to enjoy. Breakthroughs and comebacks then reshuffled the cards in the general classification, and next is the showdown in Sarno in two weeks.

OK - Minì on rails
Starting from the third starting position, Gabriele Minì gave himself yet another triumph in grand style. The Sicilian proves to be among the year's top protagonists also in the new OK category. After the false step of Juho Valtanen, started third and finished off the track in Corner one, Minì was able to stay out of trouble by immediately striking into P1 in front of his direct rivals. After the brief tussle with Pedro Hiltbrand during the first laps, the vice OKJ World Champion was able to impose himself on pace and fast laps, this quickly creating a gap on the Spaniard. Perfect race from that moment on for the Sicilian, never in doubt during the race, finishing in front of everyone past the checkered flag. With such a great show, Minì sends a clear signal to the competition, especially for the next FIA commitments.
Behind Minì, honor and merit to the new category leader Dexter Patterson, who started poorly but was steady in recoverying up to P2. Third was Pedro Hiltbrand, the best of CRG. Completing the top five were Taylor Barnard and Jospeh Turney. In sixth place, Lorenzo Travisanutto, who thus drops into second place in the overall standings. Kirll Smal's tenth place was noteworthy with twenty-four passes. Out of the race were Harry Thompson and Sami Meguetounif.
CLASSIFICATION: Patterson 239, Travisanutto 201, Barnard 158, Minì 148, Beganovic 129


OKJ - Antonelli runs away
The final of the Junior leaves no room for boredom with continuous reversals in front of all the protagonists of the weekend. Best starters Arvid Lindblad and Marcus Amand provide the initial thrills for the first six laps of the race, favoring the return of Antonelli. The Italian of Rosberg Racing hardly waits his turn; on the sixth lap, he takes the reins and leads the race. From that moment on, Antonelli left no room for competition, imposing himself to the end and picking up where he left off in Lonato. Important victory that confirms his first place in the overall standings with 215 points total.
In second place, the weekend's star driver: Thomas Ten Brinke. The Dutchman does even better than his rival by straightening out a weekend that had not been exceptional until then. With twenty-one total passes, Ten Brinke takes the second step of the podium, just behind Antonelli. Nikita Bedrin takes the last spot on the podium for Tony Kart. Fourth was Arvid Lindblad, author of his best weekend; Marcus Amand took P5.

Final B: Karol Pasiewicz triumphs at the photofinish against Jonathon Weywad by only +0.293 sec. Third place for Marcel Kuc who had started seventh.

60 Mini - Powell triumphs, Eyckmans takes the lead in the standings
Fight without exclusion of blows among the young protagonists of the 60 Mini for all ten rounds of La Conca. After the Winter Cup, Alex Powell returned to success in the cadet category with seven overtakes compared to his starting position. The Jamaican becomes dangerous once again closing with + 0.058sec advantage on Belgian Ean Eyckmans, pole man of the day and new leader of the general classification. On the third step of the podium goes Eyckmans' teammate, Coskun Irfan, at times leader of the race. The top five positions end with William Macintyre and Maksimilian Popov. Rashid Al Dhaheri, twelfth at the end, gained eight positions but not enough to remain the general standing's leader.

Final B: Russian 1-2 in the B final with Trukhin and Ageev in first and second place, third Matteo De Palo.

Appointment at the last round of the WSK Super Master Series in Sarno (March 24) with the assignment of the titles in OK, OKJ, 60 Mini and KZ2.