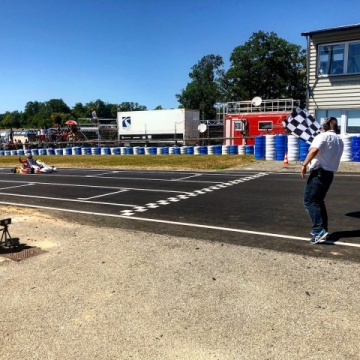 Author: Vroomkart International
In the Kart Grand of Essay, France, Patterson wins the OK Final, while Janker is the Champion.
Dexter Patterson won the OK Final of the last round of the CIK FIA European Championship for the OK direct drive classes staged at Essay.

The Briton, who moved to Kart Republic for the race, was the protagonist of an impeccable Final he led from start to checkered flag. Just a few dozen meters from the start, an accident at the third corner could have changed the fate of the CIK FIA European Championship, with Hannes Janker and Lorenzo Travisanutto also involved.

This incident could have re-opened in a sensational way a European that seemed already terminated after the epilogue of Ampfing, but a delayed Pedro Hiltbrand, in last place, failed to seize the opportunity. Indeed, with today's non-finish, which occurred on lap 15, Hiltbrand not only failed to undermine Janker from the top of the standings, but also lost the place of honor to the advantage of Harry Thompson, today in P2.  Thompson, who fought for pole position against Patterson until the last heat, finished in front of Nicklas Nielsen.

The German of KSM beat Luigi Coluccio and Callum Bradshaw in the fight for the podium. The three were the protagonists of a battle in the last stages of the race, in which Coluccio seemed in a position to take the podium.  A solid Nielsen, however, forced him to work extra hard to keep fourth place, after he had at first lost it to Bradshaw, the latter then overtaken by Zane Maloney. Ending in the top 10 were Bradshaw, Hugo Sasse, Rasmus Joutsimies, Jorge Pescador and Tijmen van der Helm.

Despite today's non-finish, therefore, Janker managed to become the European Champion in OK with a lead of 13 points on Thompson who, as mentioned, with the 2nd place today took 2nd place from Hiltbrand.