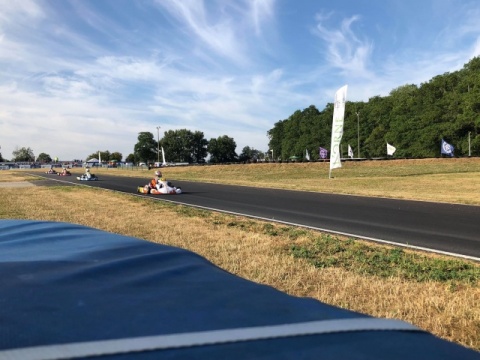 Author: Vroomkart International
Spectacular Saturday of heats in Essay on occasion of the last round of the CIK FIA European Championship for OK and OKJ classes.
In Essay, a very hot Saturday set the stage for the first day of heats that will establish the starting grid for the Kart Grand Prix of France in the OK and OKJ categories.

In OK Dexter Patterson and Harry Thompson are the leaders with three manches to go, while Nikita Bedrin leads the pack in OKJ.

OK - 4 victories for Patterson and Thompson

With 4 wins each, Patterson and Thompson are the drivers who won the largest number of heats. One win each for Nicklas Nielsen, Jonny Edgar, Rasmus Joutsimies and Lorenzo Travisanutto. No victories for title contenders Hannes Janker and Pedro Hiltbrand

OKJ -  Bedrin on top for the Final

Lots of activity on the track and the last important results for the standings. Despite the last three direct manches scheduled for Sunday, it is already a close fight at the top between Nikita Bedrin, Victor Bernier and Kai Askey. Three wins for Bedrin, two wins for Bernier and Askey. Among the other winners of the day, Luca Griggs, Laurens Van Hoepen, Zak O’Sullivan, Alfio Spina and Gabriel Bortoleto. The other two title contenders, Paul Aron e Gabriele Minì, for now remain behind without wins.

The appointment is for Sunday with the latest qualifying manches and the Finals that will award the CIK FIA European Championship crowns for direct drive classes.