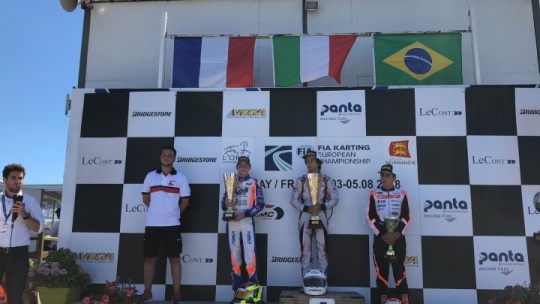 Author: Vroomkart International
The 2018 edition of the CIK FIA OKJ European Championship ends here. Gabriele Minì wins a very difficult race, Bortoleto gets on the podium, Paul Aron celebrates the European title.
Essay ends the European Championship with the most difficult race of the season. In addition to the high temperatures, not at all easy to manage, it was a race full of accidents including a red flag. At the ready, Nikita Bedrin holds his position on Askey, Bernier and Minì. Behind them, a spectacular accident causes the interruption of the race. A takeoff and rollover in curve 3 for Tom Uzan, due to a contact with Kharitonov, a crash without consequences for the Frenchman, who remained on the ground for a few minutes.

Re-Start obligatory, one led by Nikita Bedrin, in a full brawl with the home driver, Victor Bernier. The Frenchman will need only one lap to get ahead of the Russian, taking the lead in the race. Behind the first two, Gabriele Minì closes the gap after the start from fifth place. A completely different fate for the second contender to the title, Gabriel Bortoleto, bottled in fifth position, same for Paul Aron in eighth. The race continues without a hitch, with the only battle taking place being between Dunne and Minì, with the Irishman in front, up to the sixth lap. In fact, Dunne will be the architect of the retirement of Nikita Bedrin, absolute protagonist until then. Yet another contact in corner 3 with the Forza Racing driver, literally, running over the Tony Kart driver. Open road ahead for Bernier, intent on triumphing in front of his audience, without taking into account a flying Gabriele Minì, second behind him. Lap by lap, thanks also to the loss of pace by Bernier, a wonderful opportunity for the Sicilian to win the race. The crucial moment comes on the tenth lap, a surgical pass and the lead of the race now certain. With the top three positions now frozen by Bernier and Bortoleto, firmly on the podium, the focus shifts to the leader of the standings, Paul Aron, in the shadow of the frontrunners.
Abnormal weekend for the Estonian, never in a position to win the race, but fast enough to overtake Hadjar on the twelfth lap and take fourth. Better pace for the Estonian towards the end of the race, but not enough to overtake Bortoleto on the straight, the only real point to pass. In an attempt to attack the Brazilian, Aron will also lose fourth against O'Sullivan, one step away from the podium. Race ends a few hairpin turns later, with the first overall victory for Gabriele Minì, in his first European season. Great result for the Italian, ending only three points from what would have been a resounding continental title. Second position for Bernier, third Bortoleto, bronze medal of the general. Paul Aron, therefore celebrates the European crown 2018, the first in his career.