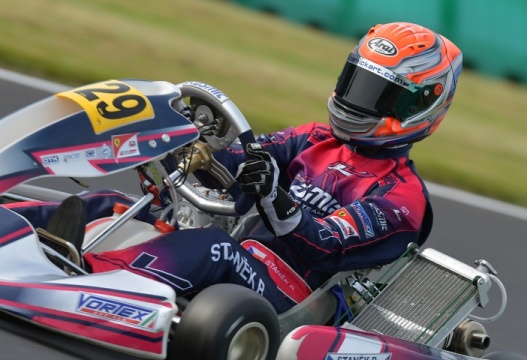 Author: Vroomkart International
A chat with one of the most prominent rookies in OK: Roman Stanek.
We met Roman Stanek in the Ampfing paddock, the Czech Kosmic driver who, in his first year in Senior, immediately captured the spotlight with a victory in the opening round of the European Championship in Sarno.

Looking at the first part of the season, you were certainly one of the revelations in OK, and the victory of Sarno and the potential shown at PFI are proof of this. What kind of mark would you give to the first half of your 2018?

«Between 7 and 8, a seven and a half. Only at the end of last year did I ask the team to take the step into OK because, knowing that it would be tough, I was aware that it would be more formative for me. If you do not win in Junior, you get angry; if you do not win in Senior ... you learn. That (win) of Sarno was hugely emotional, but also in England we were going strong. In Germany, instead, we suffered a bit, but I am sure we come back in Essay».

Ampfing, more than other tracks, was a tough track for OK rookies, would you agree?

«It was not easy for us, I admit. In Junior, more or less, we are all new beginners, but here you will find very good drivers, some of whom have already started up professionally. A track like Ampfing, old-fashioned and requiring very intense driving, has shown how important it is to have experience and know how to handle the tires. It was a lesson for the future».

Future that now speaks French for the last of the European and Swedish for the World. What are your goals?

«Like all drivers, to win. Ritual phrases aside, I don't deny being very confident for Kristianstad, a circuit that I like a lot and with a congenial climate. I hope I can assert my talent».