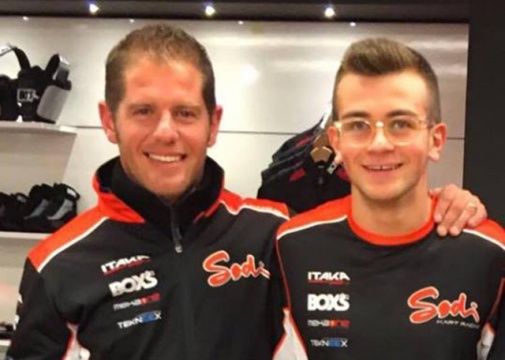 Author: Vroomkart International
Alex Irlando, after the first taste of KZ2 with Energy Corse, switches to Sodi's CPB team.
Alex Irlando, born in 1999, the previous year stepped on the highest step of the podium in the Rotax MAX Challenge Grand Finals in Portugal, catching the attention of Sodi’s management. This year he debutted in KZ2 with Energy Corse and now it’s time to change and for the next season the Italian driver will race with CPB team using TM powered Sodi.

“The first contact with Sodi happened the last year after the Grand Finals: they wanted me for the KZ2, but I had a contract with Energy Corse. Anyway we didn’t lost touch and now we’re starting this new adventure together. They wanted me and I wanted them, so we met halfay.”

The 2017 program foresees CIK-FIA European and World championships, WSK and some races of the DKM: “This first season of KZ2 was quite good: third in the WSK Super Master Series and fourth in the CIK-FIA European Championship is a good score. We could have done better: we had too many ups and downs because of my inexperience.”

Alex was one of the Italian drivers selected from the Italian ASN, ACI Sport, for the SuperCorso Federale CSAI: a professional course held at Vallelunga which saw drivers on track with F.4, Lamborghini Supertrofeo and 595 Abarth Trofeo. “It was a great experience during which I learnt a lot of useful tips that I’m using when I’m on the track and it makes the difference.”