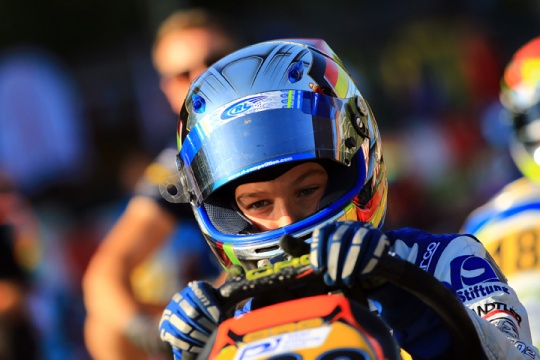 Press Release by: CRG Racing Team
CRG will take to the debut several young drivers at the WSK Final Cup of Adria in Junior, eying the forthcoming appointments and in preparation of season 2017. CRG to field Tonteri and Joyner in OK. Strong presence in Mini with private teams.
The WSK Final Cup of Adria kicks off the season’s finale as usual, a very intense period that this year will reach its conclusion in Bahrain next November 19th. This is an important moment for CRG to introduce a good number of new drivers ahead of next season.

CRG’s squad is going to be strengthened from the forthcoming round of the WSK Final Cup of October 2nd, as several young drivers will join forces with the Italian outfit especially in Junior, alongside the fresh winner of the German DKM Championship Dennis Hauger.

CRG, A LOT OF NEW DRIVERS IN JUNIOR

In the Junior category of the WSK Final Cup of Adria, CRG will also field the German  Marius Zug, who has performed very well in DKM, alongside his fellow countryman Valentino Fritsc. Also present for CRG, the Czech Dan Skocdopole and the Dutch Kas Haverkort of team CRG Keijzer Racing. Both drivers have put in strong performances in Germany.

The fresh champion of DKM from Finland, Paavo Tonteri will compete for CRG on CRG-Parilla in OK, alongside Tom Joyner on Zanardi-Parilla. Both drivers are ready to run a strong race before the closing appointment with the OK World Championship in Bahrain.

A STRONG LINEUP ALSO IN MINI