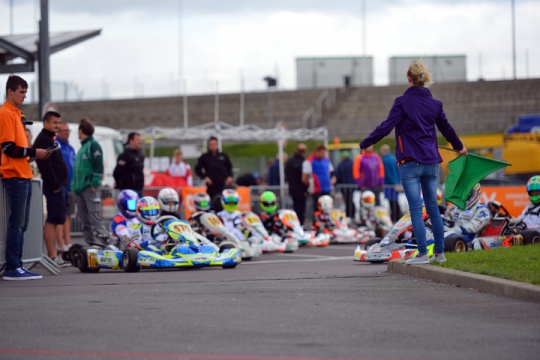 Press Release by: DKM
Fourth event of the year in the Magdeburger Boerde.
Next weekend, the German Kart Championship is going to welcome the drivers to the semi-final of this year’s season. More than 135 drivers are going to start at the ranked races seven and eight at the Motorsport Arena Oschersleben. The four grade series are still full of ecxitement regarding the fights for the titles.
The summer break of the German Kart Championship is going to end next weekend. The 1.018m long high-speed track in Oschersleben is going to welcome the best kart drivers to the fourth of fifth events. At the gates of the great automobile race track, the track provides a perfect infrastructure and is popular among drivers as well as teams. Everything is still open on the individual lists of rankings of the four grade series DKM, DJKM, DSKM and DSKC.

At the DKM, Finn Paavo Tonteri (CRG TB Racing Team) set himself apart from his opponents a little at the foreign round in Genk. With a perfect Sunday performance, he was the most successful regular driver and achieved maximum championship points. He can’t rest though: His strongest opponent still is Karol Basz (Kosmic Racing Departement) from Poland. The current kart World Champion is also driving his first full season at the top class of German kart racing and still has every chance of achieving the overall victory. So does Jean-Baptiste Simmenauer (Tony Kart Racing Team) on third place. With 39 points behind, everything’s still possible for the Frenchman. Regarding the fight for the trophy of best German driver, several drivers are currently still in the running. The two rookies Tim Tröger (CRG TB Racing Team) and David Brinkmann (KSM Schumacher Racing Team) have best chances in Oschersleben: the duo is currently on eighth and ninth positions on the overall list of rankings.

At the juniors, Tony Kart driver Charles Milesi looked back on impressive results until his performance in Belgian Genk. Of four ranked races he won three. But the tables turned in Belgium: Norwegian Dennis Hauger (CRG Holland) celebrated his second victory of the season and closed in on the leading driver by 19 points on the overall list of rankings. “My clear goal is to continue this trend until the final and to win the championship”, said the youngster highly motivated. David Vidales (KSM Schumacher Racing Team) was also able to decrease his backlog. He celebrated his first triumph in Genk and thereby stayed in the running for the title as well. Best German driver Luke Wankmüller (Solgat Motorsport) lost some ground. On seventh position he can still end up among the top ranks though.

The German Shifterkart Championship has got one of the strongest fields of participants since its beginnings this season. All in all, nine reigning or former kart World Champions are starting here. On the overall list of rankings, four-time champion Jorrit Pex (CRG Holland) is still on top. The competition is closing in though: ahead of everyone else recent European Champion Marco Ardigo (Tony Kart Racing Team). Just like his Dutch opponent, Ardigo already won two races this season. One victory respectively was won by further opponents Davide Foré (Gold Kart Racing Team) and Paolo de Conto (CRG Holland), which also still keeps them in the running for the title. The latter is going to travel to Oschersleben highly motivated: Last weekend the Italian dominated the Shifterkart World Championship in Sweden and secured the renowned title. The German drivers are currently lead by Daniel Stell (CRG TB Racing Team) on eleventh place.

The DMSB Shifterkart Cup celebrated a huge success in its first season. With 34 drivers, the field has been completely filled up since the beginning of the season and promises lots of excitement. This also shows in the fight for the title. Symen Wiggers (CRG Holland) from the Netherlands starts as the overall leading driver. His fellow countryman Max Tubben (CRG Holland) is very close behind with only three points less. The youngster has shown an impressive rookie season so far and already won two races. Nothing’s been decided for the duo yet though. Christopher Hold (Maranello Kart Srl.) on third place is very close as well as both Germans Maximilian Paul (NKS for Racing) and Patrick Kreutz (RS Motorsport) on fourth and fifth places.

The drivers are going to start their first free trainings on the track in the Magdeburger Boerde on Friday already. The real exchange is then going to happen during qualifying and the heats on Saturday, which is going to set the starting positions for the first races on Sunday. Everyone who can’t be on location is going to be able to follow all racing events via video-live-stream or live-timing on www.kart-dm.de again.