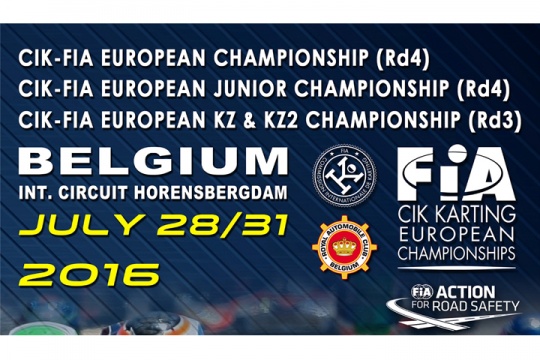 Press Release by: FIA Karting
All the European titles to be awarded at the last round of the CIK-FIA Championship for OK, OK Junior, KZ and KZ2, from 29th to 31st July. The event is hosted by the circuit of Genk, in Belgium. On Sunday, the live streaming oncikfiachampionship.com and cikfia.tv. Special report after the race on Motors TV.
The CIK-FIA Championship at its great finale.

There are great expectations for the last round of the European CIK-FIA Championships in Genk, where the four categories fighting for their titles will take part in the last and decisive event. The 1,350 metres of the Horensbergdam International Circuit are going to be as hot as ever, and not only for the summer heat. There are going to be gripping duels between the drivers who are aiming at winning the titles. The more experienced participants in the gearbox categories as well as the younger drivers of the direct drive classes are eager to challenge to conquer their place in the history of karting. There are several drivers, in all the categories, who still stand a good chance to win the title: this is a further reason to follow closely the weekend which will start on Friday 29th July with free and qualifying practice, will continue on Saturday 30th with the heats and then it will have its final phase on Sunday 31st. There are 235 entrants to the races: don’t miss this outstanding event on cikfiachampionship.com and cikfia.tv: the two webchannels will broadcast the final stage of the event, starting with the drivers’ parade. The following week, the usual appointment with the special TV report on Motors TV.

The challengers in Genk.

In KZ the Italian Marco Ardigò (Tony Kart-Vortex-Vega) leads with 84, two points ahead of the French Jeremy Iglesias (Sodi-TM), while the Czech Patrik Hajek (Kosmic-Vortex) is third with 80. In KZ2 the leader is the Italian Fabian Federer (CRG-Modena-Vega) thanks to his 85 points, only three points more than the Dutch Stan Pex (CRG-Vortex). The Italian Alessandro Irlando (Energy-TM) and Luca Corberi (Tony Kart-Vortex) are in third and fourth position respectively and can still aim at the title. The British Tom Joyner (Zanardi-Parilla-Vega) is in first position in OK with 108 points, followed by the Polish Karol Basz (Kosmic-Vortex), second with 105. The Spanish Pedro Hiltbrand (CRG-Parilla) is third with 95 points and he still stands a good chance to lay his hands on the title. The Danish Noah Watt (Tony Kart-Vortex-Vega) leads in OKJ with 107 points, 16 points more than the second, the Brazilian Caio Collet (BirelArt-Parilla), who is only one point ahead of the Swedish Isac Blomqvist (Tony Kart-Vortex). The gaps in the standings are so narrow that the outcome of the Championships will be uncertain until the very end of the Belgian round.