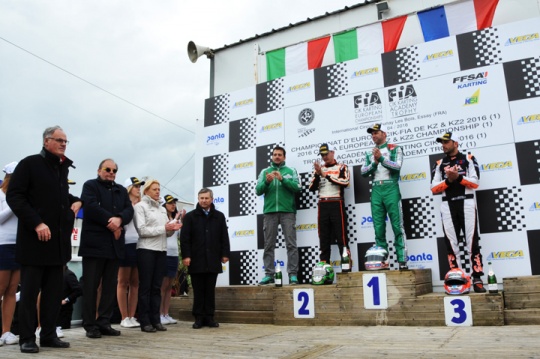 Author: Vroomkart International
Tony Kart sweeps the competition winning in both KZ2 and KZ, respectively with Corberi and Ardigò. The Brit Callum Bradshaw is the man to beat in CIK FIA European Academy, winning both prefinal and final

Marco Ardigò (Tony Kart-Vortex) shows the way from the top spot in the prefinal race, making a great comeback from the fourth position. Josè Carlos Pescador (Praga-Parilla) starts badly and lost the lead of the race in favour of Paolo De Conto (CRG-Maxter) and Jeremy Iglesias (Sodi Kart-TM), who grab the opportunity. The Tony kart ace overtakes the French driver during the third lap, chasing and overtaking De Conto the following lap. In the meantime Rick Dreezen (Ricciardo Kart-Parilla) imitates Ardigò, overtaking all the opponents between him and the Italian champ. The leading duo is faster than other drivers racing on their own, but, as usual, Marco Ardigò finds some serious speed in the end of the race winning the prefinal race.

In the final race Jeremy Iglesias stars greatly followed by De Conto and Rick Dreezen, while Ardigò tries to get away. Behind the Tony Kart driver, Iglesias and De Conto fight hardly for the runner-up position, while Flavio Camponeschi finds his way to fourth place. The leading quartet has another pace, and gains a considerable gap from other opponents. During the fifth lap the Frenchman Iglesias overtakes the leadership, while the following lap Camponeschi gets the better of De Conto. Marco Ardigò needs some laps to pass Iglesias, but in the end he passes his opponent and finds an incredible pace opening a relaxful gap. In the end of the race, Flavio Camponeschi passes Iglesias earning the second step of the podium.

In the first prefinal, Stan Pex (CRG-Vortex) and Paolo Besancenez (Tony Kart-Vortex) get away from the pack, while Alessio Piccini (Tony Kart-Vortex) starts well gaining the third position immediately after the green light, followed by Alessandro Irlando (Energy Corse-TM). Dylan Davies (CRG-TM) and Persson Benjamin Törnqvist (CRG-TM) join the battle for the lowest step of the podium, completing a hardened quartet. Lap after lap gaps increase, and Pex takes home the first race.

The second prefinal is stopped due to a bad accident that involves Matteo Viganò (Top Kart-Parilla), who hits a marshal stationing hurting the marshal who is transfered to hospital. After the green light, Leonardo Lorandi (Tony Kart-Vortex) loses the lead of the race being third behind Luca Corberi (Tony Kart-Vortex) and Fabian Federer (CRG-Modena Engines). Corberi immediately gets away from the group, while Lorandi and Fabian Federer exchange their positions, with the SRP Racing Team driver who gets the better of Baby Race ensign. While Fabien Federer is closing the gap with Corberi, the accidents happens and the race is stopped.

The final race seems to be just another day in the office for Luca Corberi, who starts from the second spot behind Stan Pex gaining the leadership of the race on the second lap, and increasing his advantage lap after lap up to 4 seconds on the finish line. Behind his shoulders, Lorandi touches Besancenez in turn 2 obliging the #302 to start a comeback from the eight place. Challenge accepted, and the Tony Kart ensign finishes on the lowest step of the podium after fighting with Lorandi and Pex during the last lap. 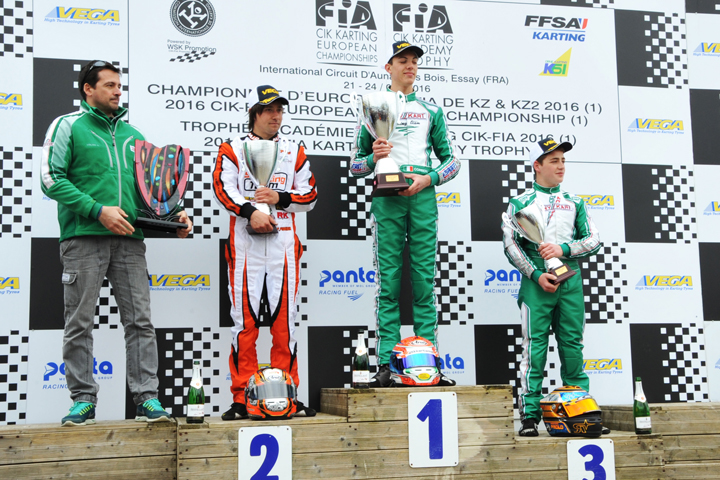 Not a great track for these young drivers who are not able to create some intense fights, except for the classic tangle in turn 1. Despite changing climatic conditions, Callum Bradshaw wins both prefinal and final races leading the pack from flag to flag. In the prefinal Thomas Mialane steps on the second spot of the podium, followed by Mads Eielso Hansen. The two drivers exchange positions in the final race, with the Brit always in front of the group. 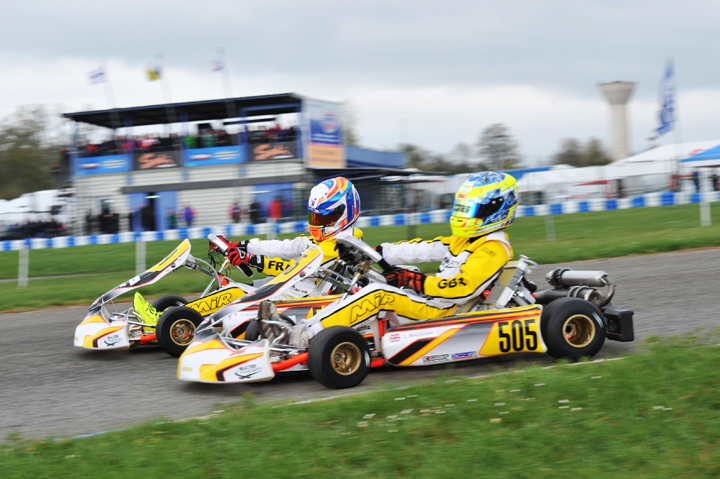