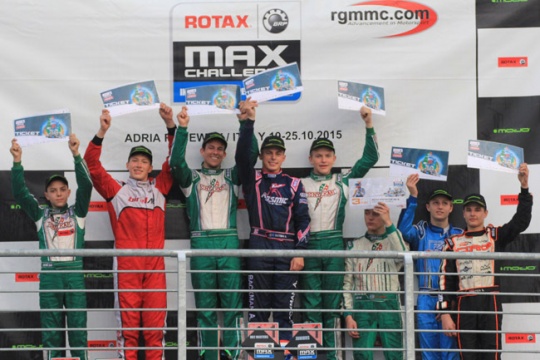 Press Release by: RGMMC
Adria Raceway witnessed the decisive showdown of the Rotax MAX International Open. The final day of the prestigious event lived up to its promise...
Thrilling and exciting fights made the races' outcome unpredictable up to the chequered flag. In the end Nicolas Schoell (juniors), Stan Pex (seniors), Andreas Backman (DD2) and Robert Schluenssen (DD2 Masters) took the victory, equally receiving their ticket to the ROTAX MAX Grand Finals in Portugal.

In the juinor's prefinal the quadruple dominance of Strawberry Racing was broken. Right at the start, pole setter Nicolas Schoell (Strawberry Racing) dropped back several positions, finally recovering to fifth place in the end. On the top, the lead changed several times between Axel Charpentier (Strawberry Racing), Tom Gamble (Strawberry Racing), Johnathan Hoggard (KR Sport) and Scott Symons (KR Sport). By halftime the KR Sport duo managed to head away from the grid and by a strong final spurt Scott Symons took the win closely ahead of his teammate Johnathan Hoggard. Axel Charpentier and Tom Gamble followed in third and fourth place.
In the final, the KR drivers could not confirm their brilliant performance: After a few laps of fierce fighting Axel Charpentier and Nicolas Schoell set the pace and pulled away from the grid. In the penultimate lap Schoell took the lead and defended the top up to the finish line, finally snatching the coveted win ahead of his teammate. Dzianis Slavinski (Dann Holland Racing) from Belarus completed the podium in front of Tom Gamble and Johnathan Hoggard. Prefinal winner Scott Symons was excluded due to unfair driving.

Adrien Renaudin (Kart Pro Racing) had the best start into the senior's prefinal. At first the Frenchman pulled away from his chasers but lost his leading gap after a few laps. He then had to cope with Gary Donnelly (Strawberry Racing) and Berkay Besler (Bouvin Power) who both managed to take the lead for at least one time during the race distance. As the race approached the end, Gary Donnelly and Adrien Renaudie headed away from the grid and crossed the line in the mentioned order. Behind them up to 13 drivers struggled for third place, which finally was defended by Berkay Besler, ahead of Jack McCarthy (Strawberry Racing) and Alessandro Trombelli (KR Sport), while favourite Rinus van Kalmthout (Daems Racing) had to retire due to a collision.
The final was quite a nail biter. Adrien Renaudin and Gary Donnelly were in the favourite positions, changing the lead a few times, although the chasers were close on their heels. Then by halftime Renaudin suffered a setback. His rear bumper got lose, which forced him to retire. So Berkay Besler and Russia's Denis Mavlanov (KR Sport) caught up for the leader but they were not lucky either, since a collision threw them out of the race. Next ones were Luc Willemse (Team TKP) and Dutchman Stan Pex (CRG SPA). By the last lap they managed to close the gap to Donelly and in a spectacular last minute attack it was Pex, holding all the aces. He overtook both of his opponents and celebrated the win. Willemse followed in second place, close ahead of Donelly in third place. Alessandro Trombelli and Jack McCarthy completed the top five positions.

In the DD2 class Andreas Backman did a brilliant job in the prefinal: After a perfect start, he controlled the race and celebrated a start-finish win. Behind him, Aaron Sherlock (Paul Carr Racing) really rocked the boat. Having picked up the race from ninth place, the Irish driver boosted himself into the second place after the very first lap and secured that position easily to the end. But a due to a technical non-conformity Sherlock was excluded, whereby Constantin Schoell (BirelART/KMS) inherited the second place ahead of Dutchman Joey Alders (Schepers Racing Service), Kevin Ludi (Spirit Racing) and Jose Brito (CRG SPA) from Ecuador, who equally was the bester Masters driver.
In the final Andreas Backman had no walkover. In the beginning Constantin Schoell and Kevin Ludi were the ones determining the pace. It took Backman almost half of the race distance until he recovered and regained the lead. From then on, he was able to pull away and take the victory. The following positions were far away from being settled. Constantin Schoell, Kevin Ludi and Jose Brito fought for the podium positions until a collision shuffled the ranking: Ludi dropped back to sixth place and Brito – suffering from a puncture – saw the chequered flag on 19th spot. Consequently Schoell took the second place ahead of Ville Viilainen, Masters winner Robert Schluenssen (RS Competiton) and Philipp Seewer (Spirit Racing) from Switzerland.

By the chequered flag of the ROTAX MAX International Open, the organising RGMMC Group looks back on another successful ROTAX racing season. Now the preparations for 2016 are in full swing and the next event is not too far ahead: from 8th to 14th of February 2016 the traditional ROTAX MAX Winter Cup in Valencia (ESP) will be the next major event by RGMMC. So save the date and meet you there! Stay tuned on the official website www.rotaxmaxeurochallenge.com or www.rgmmcmedia.com, where you get all information regarding reports, photos, results and live TV stream.