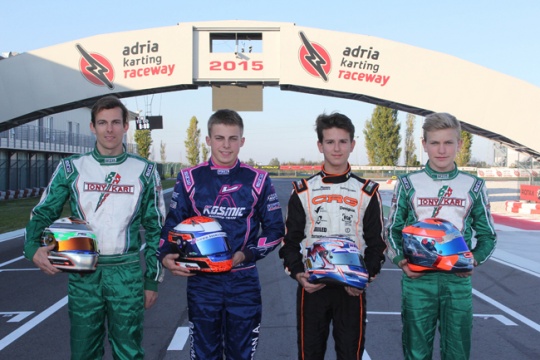 Press Release by: RGMMC
On Friday the ROTAX MAX International Open kicked off the first decisive sessions.
On the beautiful and modern track of Adria Raceway over one hundred drivers headed for the qualifying practice while sunny and almost cloudless weather made for best conditions on the 1.300 metres long circuit. In the end the key to the pole position was all about the right slipstream.

In the junior category, representing the largest field of the International Open by more than 40 drivers, Nicolas Schoell (Strawberry Racing) raised the bar. The Austrian drove a time of 59.935 seconds and was only 0.058 seconds quicker then Jonathan Hoggard (KR Sport) from the UK in second place. The leading two drivers were the only ones breaking the sonic barrier of 51 seconds. Third place went to the British youngster Scott Symons (KR Sport), followed by his fellow countrymen Luke Ide (Dan Holland Racing) and Mark Kimber (Dan Holland Racing), who all belonged to the second and obviously faster qualifying group. Frenchman Axel Charpentier (Strawberry Racing) set the best time in the first group, which finally was only enough to take sixth place in the overall ranking.

Mauricio van der Laan (CRG SPA) was the fastest man in qualifying of the senior class. By a time of 50.479 seconds the man from Spain took the top, ahead of Turkey's Berkay Besler (Bouvin Power) and Dutchman Luc Willemse (Team TKP). Frenchman Adrien Renaudin (Kart Pro Racing) and the reigning Euro vice champion Rinus van Kalmthout (Daems Racing) completed the top five positions, all belonging to the first qualifying group, which was remarkably quicker than the drivers of the following session. This one was led by Josh White (Cole Racing) but his time of 50.812 seconds was just good enough for the 13th place in the total ranking.

In the DD2 category Andreas Backman (Daems Racing) impressed during his comeback in European ROTAX racing. The man from Sweden drove the best time in the shifter class, while there was another surprise to find in the second position: Robert Schluenssen (RS Competition) – team boss of RS Competition – got back behind the wheel and proved that he has not lost his talent for active karting although his last race dates back almost ten years. Even more remarkable: the Dane was the best Masters driver. Third place went to Aaron Sherlock (Paul Carr Racing) from Ireland, ahead of Switzerland's Kevin Ludi (Spirit Racing) and Finland's Ville Viilainen (VRT), who complemented the top five positions.

On Saturday race action is on the agenda. All told 18 qualifying heats will ascertain the grids for the final races on Sunday. Everybody is invited to join the race action, as live TV coverage will start on Friday and continue throughout the weekend. So stay tuned on the official website www.rotaxmaxeurochallenge.com or www.rgmmcmedia.com, where you get all information regarding reports, photos, results and live TV stream.