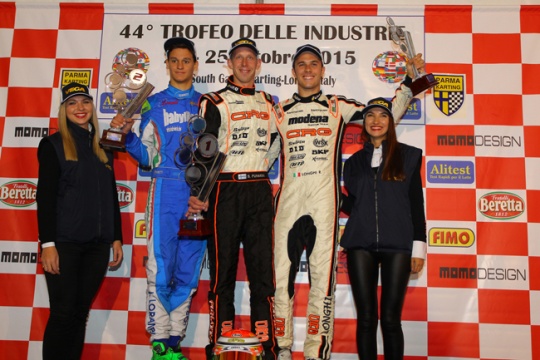 Press Release by: Parma Karting ASD
The race organized by Parma Karting at South Garda Karting circuit of Lonato, has been a memorable event.
Edition 44 of the Trofeo delle Industrie was blessed with the competitiveness of entered drivers, an always perfect organization and the high quality of the winners of the three category.
At the end three great protagonists of International karting ended up being victorious: namely, the Finn Simo Puhakka in KZ2, on CRG-Maxter, the CRG works driver for the occasion was “borrowed” by Renda Motorsport, the Spanish driver Marta Garcia in KF Junior, on FA Kart-Tm, fresh winner also of the CIK-FIA Academy Trophy,Mattia Michelotto in 60 Mini, on Energy-Iame, unquestionable protagonist of this category in the various national championships and recent winner of the Italian championship.

KZ2
In KZ2 in Prefinal and Final the winning pace of Simo Puhakkareconciled everyone after starting with a P3 in qualifying and the fourth at the end of heats. In Prefinal Puhakka was second, and then he got the lead early on in the Final leading all 25 laps of the race. Behind Puhakka, a new name in the category who was virtually at the debut in KZ2: Leonardo Lorandi on Tony Kart-Vortex, has been the only one breaking the domination of CRG and Maranello drivers. The third place of the podium went to Riccardo Longhi, on CRG-Tm, who has been a strong protagonist until the victory in the Prefinal. The fourth and fifth position went to other two CRG drivers, Andrea Dalè and Giacomo Pollini, who led the quickLorenzo Lapina on Italcorse-Modena. Tommaso Mosca, on Maranello-Tm, had to retire early after the quickest time in qualifying of his group and the third place in the Prefinal. Fabian Federer, on CRG-Maxter, also retired after being second at the end of the heats, but he stopped early in the Final as he broke his chain.

KF JUNIOR
The victory of the Spanish Marta Garcia, on FA Kart-Tm in KF Junior has been spectacular. She has been very quick for the whole weekend and then was third in the Prefinal and won the Final, getting the lead in the closing four laps by overtaking two Energy Corse drivers of the likes of the Dane European Champion Christian Lundgaard and the Spaniard David Vidales, that had been fighting for the win since the beginning. Lundgaard and Vidales had to settle for the other two positions of the podium, as Lundgaard was second and Vidales third, while the Spanish girl won the Final under the cheering applause of the spectators. The fourth place went to the Swede Isac Blomqvist on Tony Kart-Vortex who ended ahead of the first of the Italians, Lorenzo Colombo, also on Tony Kart Vortex. The Russian Bogdan Fetisov (Tony Kart-Tm) had to settle for the sixth position after dominating qualifying, heats and Prefinal.

60 MINI
The very young Mattia Michelotto, on Energy-Iame, eventually triumphed leading a strong set of rivals. Michelotto managed to get the win in the Prefinal after the third place in the heats, but in the Final he had been great to take an early lead, while his main rivalLeonardo Marseglia on Evokart-Tm had an hiccup at the start and lost some ground. Leonardo Caglioni also put in a strong race on Evokart- Tm, installing himself in second place and keeping it all the way to the flag. Marseglia ended third instead. The fourth place went to Federico Cecchi, su Tony Kart-Tm, while Leandro Anderruti, on Zanardi-Tm, and Mattia Muller on Tony Kart-Tm followed.