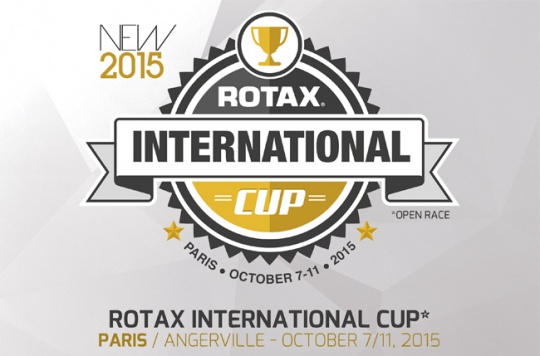 Author: Vroomkart International
3MK Events, the organiser of the Rotax International Cup, has launched the registration campaign for the new international Rotax event to be held near Paris from 7th to 11th October 2015.
Many of teams and drivers have already expressed interest in the de facto World Cup dedicated to Rotax Max.

With a renowned circuit, in an optimal location, and a well-judged date 3MK Events has put everything in place to make the first edition of the Rotax International Cup a success. The Angerville circuit needs no introduction, everyone remembers the great events organised in Ile-de-France in recent years by the CIK-FIA, WSK Promotion and the FFSA, and for the Rotax Max Euro Challenge. The geographical location at the crossroads of northern and southern Europe is particularly suited as the track is served by major roads, and the two major Paris airports are nearby. And no one is indifferent to the well-known attractions of the French capital. In October, the Rotax International Cup will crown the season with a "World Cup" for the best specialists of the discipline, in addition to the Rotax Grand Finals with a single-make competition.

3MK Events adds organisation experience to this attractive package, including a particularly rigorous vision of the technical and sporting aspects which has often been proven, in addition to constant concern for the enjoyability of the event.

Registration are now open at the site www.rotax-international-cup.com

The total entry fee for the Rotax International Cup is €1100 including all taxes, including the race entry, two sets of slick tyres, a set of wet tyres, a can of XPS Full Synthetic oil and a T-Shirt. This amount will be increased by €100 from September 12th.

Five categories will be welcomed as part of the 2015 Rotax International Cup in line with the composition of the Rotax Max Challenge, equipped with engines in the new Rotax Max evo range and Mojo tyres. Junior Max, Max 125, Max Master 125, 125 Max DD2 and 125 Max DD2 Masters will have their own races according to the classic programme of qualifying, heats, prefinals and finals. For the repechage, 3MK Events will decide between the drivers from their fastest time and not according to their position in that specific race.