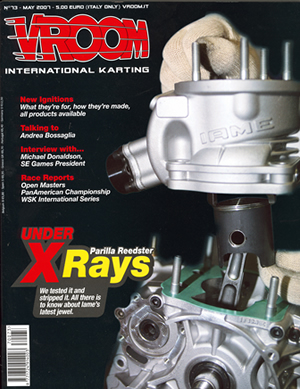 MONDOKART
INTERWIEW WITH – Virtual but real
Together with Michael Donaldson, president and CEO of SE Games, we looked into the first real karting simulation game: ‘Kart Champion- On the Limit’
THESIS & COUNTER – THESIS – Ignition no regrets
Despite difficulties in routine (and non), the way for advanced ignition “variable..but fixed” is the right one.
THE PRATICAL SIDE – Simple and refined
In this issue we look the different manufacturing ideas behind the new KF engines, starting from the Parilla Reedster in KF1 version that Iame kindly allowed us to take a closer look, or better an inside view. The main difference respect to the old 100cc lies mainly in all the “accessory” components that engines have, and in one or two other special parts.
TALKING TO – For most...but also for the mass
Iame’s commercial policy that can also be seen in the firm’s technical choices, has taken the huge business enterprise, situated in Zingonia, to supply several official teams, proof of a well- developed engine capable of taking different chassis to top placings and also satisfying the needs of private drivers.
TRACK TEST – Drivers’ playground
We tried one of the new international racing karts for the 125KF class, a KF2 (ex- ICA) mounted by a Parilla Reedster F2 engine. A test session in Lonato that enabled us to see for ourselves how these new vehicles worked and at the same time be put to shame by the world champion, Forè who was also there (but on a KF1).
RACE REPORT – Ugento lights up enthusiasm again
The Parilla Reedster confirms its place as a convincing antagonist of the Vortex RAV during the second round of the International Open Masters, the track in Ugento though did its share too...underlining the importance of the chassis, the most determining component, the one that makes the difference. Great racing, surprises and much more, in races that have marked the Maranello Team’s come back.
Like Fish in Water –
The Panamerican Championship took place in Argentina, and saw the participation of 7 drivers from Brazil, 5 from Perù, 3 from Chile, 6 from Bolivia, 10 from Uruguay, and 42 from the country hosting the event. The Argentine crowd was rewarded with two fellow countrymen taking the win, Milla in Sudam and Scalbi in Sudam Junior. For the Codasur Cup, Lichtenstein took the cup win in Pre Junior, and Meizoso in Cadet.
Thonon... a Spanish do
The second round of the WSK series puts Zuera and Spain in the limelight of international karting again. The hard work and determination of those who believed and invested in this project has paid off- the only flaw, no KF1.
EASYKART AROUND THE WORLD
NATIONS – Usa, England, France, Brazil, Japan, Austria
ANY TECHNICAL QUERIES
JUNE RACING CALENDAR
CARTOON – “Try again”