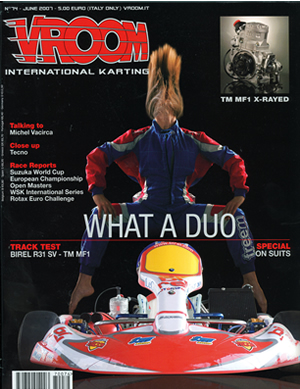 MONDOKART
TALKING TO – Michel Vacirca
Michel Vacirca, World Champion driver, mechanic, team manager and retailer, runs Crg Holland. He has changed his team into a small factory thanks to his driving force and strong will-power.
CLOSE UP – Tecno, from A to Z all made on site
Tecno is one of the factories that make chassis and all the necessary components on site, from bends in tubes to sandblasting and varnishing.
SPECIAL ON SUITS – They aren’t...all alike
Motorbikes, cars and karts: the drivers’ second skin aren’t all the same. Here we’re going to have a look to see why technical clothing should never be only a mixture of colours that go with your kart, but something that guarantees protection in case of accidents.
TRACK TEST – Hit below the belt
No, I don’t mean “not allowed”, but rather a great “torque drive” given by TM mounted for the KF2 class gives to the entire set up with Birel chassis, the official couple for international races. But it’s a propulsive drive supplied continuously at the usual corners.
THE PRATICAL SIDE – New generation
A new family of MF engines joins that with an historical past and bright present, for the K series, Manufacturers hopes to repeat their success this time too. It’s now the TM MF1’s turn, the weapon of the factory in Pesaro, for the KF class.
TALKING TO – Claudio Flenghi
It wasn’t easy to fix a meeting with Claudio Flenghi who is the man in charge of the karting sector at TM. After trying for several months, in the hand we had the pleasure of seeing him in Pesaro. Here you can read what he has to say about the evolution in regulations that have determined the TaG  philosophy.
RACE REPORT – World Cup, European Championship, Open Masters, WSK International Series, Rotax Euro Challenge.
NATIONS – England, Hungary, Denmark, Argentina, Brazil, Japan
JULI RACING CALENDAR
CARTOON – “Briefing”