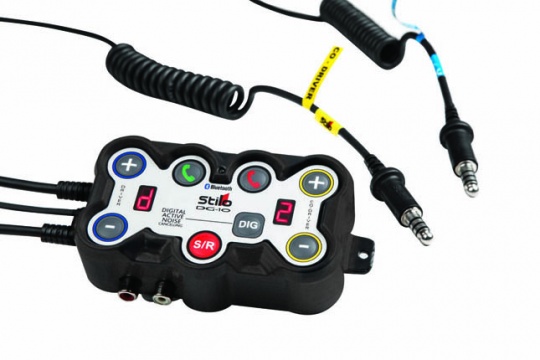 Press Release by: (To Be Defined)
The 30th of October is an historic date for Stilo. Two innovative products have been presented to the motorsport world: the ST5 helmet and the digital technology of the intercoms DG-30 and DG-10.
These much awaited projects have been shown in a dedicated event, named “Stilo World Convention”, held at the Riccardo Paletti circuit in Varano de’ Melegari (Parma-Italy).
Excellent products, ST5 and DG-30 that have been presented in much deserved special event where the Stilo Team, well directed by the Managers Ludovico Fassitelli and Elena Perini organized the launch day in two phases, independent but equally important. In the first part of the day, guests and dealers from the globe could learn technical, constructive, functional details, the design and all details of Stilo new “weapons”. The second phase of the Convention took place at the paddock and especially on the track, on WRC cars and a Ferrari 458 Italia GT.
MEETING ROOM. In the meeting room Mr Fassitelli led the audience made of professionals to discover all features of the Stilo ST5, with a fluent and exhaustive speech that minute by minute increased the expectations towards the new projects. When ST5 unveiled its shapes, unmistakably recalling the design of all Stilo helmets, guests rushed towards the displayed models to see first-hand this extraordinary piece of technology and design made in Italy. The following presentation of the new communication systems with digital technology, DG-30 and DG-10 did not disappoint either as the products developed by Stilo clearly fully satisfied the public.
CIRCUIT. “Stilo World Convention” continued with an afternoon dedicated to active testing on track. All guests were given the chance to test DG-30 and DG-10 sitting as co-drivers of the Rally Champions Piero Longhi, Luca Rossetti, Umberto Scandola and Ludovico Fassitelli. A way as pleasant as concrete to evaluate the absolute unique performance of the communication systems DG-30 and DG-10, directly derived from the intercom designed for Volkswagen Motorsport and already fitted into the WRC Polo, World Champion with Ogier. The ST5 range was well displayed also next to a Ferrari 458 GT2 from AF Corse, World Champion with the Stilo drivers Gianmaria Bruni and Toni Vilander. Stilo philosophy wants products to be tested and evaluated with no filters, directly and clearly, this is why people could wear ST5 and ST4 ranges and sit at the wheel of the Ferrari 458 GT2 for a static comparative test of the visual fields and the functionality of the new helmet.
GUESTS. Despite the racing season still open, the Champions Sébastien Loeb, Jolyon Palmer, Augusto Farfus managed to send us their greetings from afar though video messages shown during the event but also the “live” phone calls with the newly crowned World Champions Sébastien Ogier (WRC) and José Maria Lopez (WTCC) were really appreciated. The Rally Champions Piero Longhi, Luca Rossetti and Umberto Scandola , the Audi Motorsport drivers Filipe Albuquerque and Marco Bonanomi, Andrea Piccini (GT), Christian Pescatori (GT) and Sauro Cesetti (Karting) took part to the event personally.
STILO ST5F and ST5GT. Is the heir of a dynasty of products that deserves credits for the elevation of the standards of safety and quality. With ST5 the company owned by Ludovico Fassitelli and Elena Perini confirms its vocation for the meticulous and inexhaustible research for perfection, pushing the limit always further, towards quality unimaginable horizons. Without false modesty, Stilo ST5 is now the benchmark for all competitors. The challenge is on!
INTERCOM WITH DIGITAL NOISE CANCELLATION. This product was born from the precious and selective partnership with Volkswagen Motorsport. Stilo accepted the exciting challenge that came from the German manufacturer and designed and realized a product that stands even further ahead other competitors’, offering World Champions’ quality and functional standards.

Articles related to: (To Be Defined)