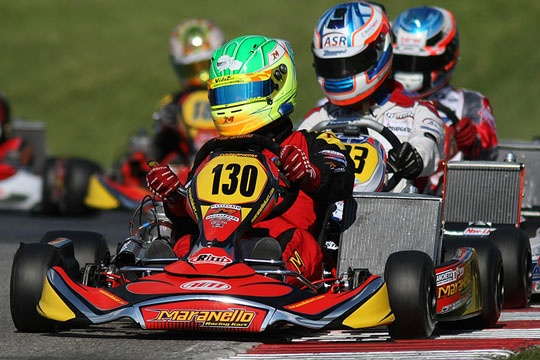 Press Release by: Parma Karting ASD
In the picture: Marco Zanchetta, one of the protagonists in KZ2 at the 42th Trofeo delle Industrie from 8th to 10thNovember 2013 in Lonato (Ph. FM Press).
The 42thedition of the Trofeo delle Industrie in Lonato announces to be once again very interesting, with a very good drivers' presence in all categories. Great adhesion in KZ2, 60 Mini sold out and good participation in KF3 and KF2. The first green flag to wave on free practice on Friday 8th November.

The 42nd Trofeo delle Industrie – underway from Friday 8th November to Sunday 10th at South Garda Karting of Lonato – will feature good numbers in all categories on track, that are 60 Mini, KF2, KF3 and KZ2.

Expectations will be high for  the blue riband category KZ2 that will see about 50 drivers on track with some top-drivers like Davide Forè on CRG-Tm run by thePolish team DTK, who is keen to cancel the incredible epilogue of the WSK Final Cup held last Sunday where he lost the victory at the last corner. Other big names are those of Maranello Kart's duo made by Marco Zanchetta – who has been protagonist in international karting – and by the Italian vice-champion Massimo Dante, both drivers are quite well motivated to end the season on a high.

The smallest category 60 Mini filled its 30 places grid. Most of the protagonists of the season are hunting a counter-charge here in a race that will not involve only the drivers of the most titled teams like Baby Race and Gamoto Racing. The Trofeo delle Industrie will certainly be another interesting and all-to-be-followed challenge involving the youngest champions that battled with each other for the Italian championship all around Italy as well as in several rounds of WSK.

Interesting names also among the about 40 drivers to compete in KF3 where several youngsters dream of adding their names on the hall of fame of the category. Alessio Lorandi of team Baby Race showed a very good shape both in national and international competitions and will try to add another win to the Trofeo delle Industrie won in 2010's 60 Mini. The European Champion of the category, Lando Norris, will also be part of the games with team Ricky Flynn, as well as former F1 driver Jean Alesi's son Giuliano Alesi.

In KF2 the British driver Callum Ilott in force at Chiesa Corse will have the favours of the eve among the 25 at the start, as he already won the absolute Trophy last year and recently clinched the victory in the WSK Final Cup runlast Sunday.

All information are available at www.parmakarting.it