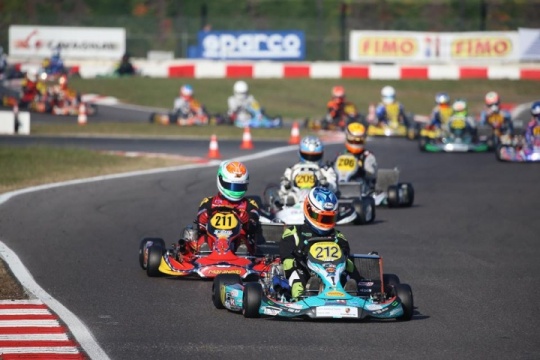 Author: Vroomkart International
Riccardo Longhi confirms his first position in KZ2, while Nicolò Zin grabs the win in Prodriver. Pavel Bulansev gets the better of Alessandro Giardelli in OKJ, and his fellow countriman Nikita Bedrin is the king of 60 Mini.
60 MINI

Nikita Bedrin holds the head of the race in front of Kirill Smal and Ruslan Fomin, with Gabriel Bortoleto immediately behind them. Nikita gets away from the group, while Bortoleto and the two Russian drivers fight for the runner up position. Ruslan Fomin is able to open a little gap on his fellow countryman, but, once again, is Andrea Kimi Antonelli who grabs the attention of the crowd in Lonato: the young driver from Antonelli Motorsport recovers five positions and with a great overtake on “Coltello” turn grabs the third position.

Levelled and hard fought race with Giardelli, Civico and Bulantsev battling for the lead. After a couple of laps Gardelli and Civico escape from the group and fight for the lead between themselves. On lap 8 Bulantsev grabs the head of the race overtaking Civico and Giardelli. Russian driver escapes while Giardelli tries to defend the second position from the Spanish Civico. On the last lap Giardelli leaves the Spanish driver behind him, and he starts tailing Bulansev, but the Russian is able to defend his leadership and win the race.

Riccardo Nalon and Luca Bombardelli lead the group after the start followed by Nicolò Zin. The two leading driver have a contact on “Coltello” turn, and Bombardelli spins and restarts from the last position. Nalon loses position, so Zin takes the lead followed by Marco Mazzantini, and they touch at “Coltello” too, but they don’t lose position. Denis Tuia follows in third. Riccardo Nalon joins the battle for the lead, and touches Zin on the last lap. In the end Zin is able to cross the line in first under the chequered flag.

It seems just another day in the office for Riccardo Longhi, who win the final race. Longhi starts well and holds the lead in front of CRG’s duo composed by Mirko Torsellini and Adrea Dalè, who are not able to overtake him. Great race by Fabian Federer, who recovers from seventh up to fourth position.