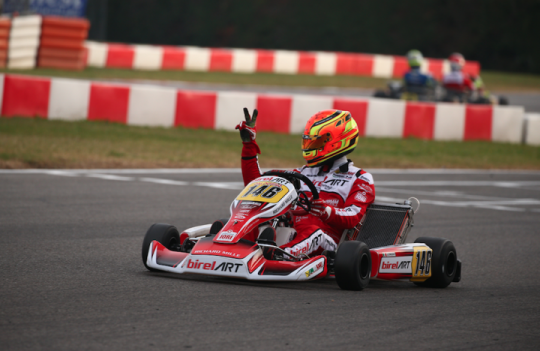 Author: Vroomkart International
The victory of the 46th Trofeo delle Industrie went to Longhi (KZ2, BirelArt, BirelArt), Lulham (OK, Forza Racing, Exprit), Patterson (OKJ, Forza Racing, Exprit), Bedrin (60 Mini, Baby Race, Tony Kart).
The 46th has been a really memorable edition for the Trofeo delle Industrie, the international race organized by Parma Motorsport that has taken place in Lonato at the South Garda Karting circuit. The event has enjoyed a record participation of 248 drivers coming from 32 different Nations to compete in categories KZ2, OK, OK-Junior and 60 Mini.
An historic record has been scored this year by this amazing edition of the Trofeo delle Industrie – the event was second only to edition 1993 when 261 drivers entered the event that took place at the Kartodrome of Parma – which confirms this karting race as a really very important event on the national and international karting scene, obviously thanks to the presence of the main constructors and teams.

At the end of two particularly intense days characterized by an excellent level and spectacular duels on track to define the starting grids of the finals, the main protagonists of this unforgettable 46th edition of the Trofeo delle Industrie emerged on Sunday.

LONGHI AGAIN IN KZ2. Riccardo Longhi (BirelArt-TM-Vega) has claimed his second victory  straight at the Trofeo delle Industrie in KZ2. BirelArt’s driver has been unstoppable in the Final and got the most of a bad start from Fabian Federer (CRG-TM-Vega), who started from the pole position as he won the Prefinal. Longhi had clear way and led the race from lights to flag, while qualifying pole man Giacomo Pollini (Formula K-TM-Vega) managed to install himself in P2 finding his way past an excellent Mirko Torsellini (Zanardi-Parilla-Vega), who in turn run a great race anyway. Among the protagonists of KZ2, Federer managed to recover up to P4, leading Benjamin Tornqvist (CRG-Tm-Vega), while Giuseppe Palomba’s race (Intrepid-TM-Vega) is also worth mentioning. He ended in fact his effort in sixth place, after a great comeback race due to the penalty he was handed in Prefinal. GP3 driver Alessio Lorandi went back to karting in this occasion and has been very competitive since the beginning, even though in the end he was pushed down from P8 to P16 due to the dropped front fairing of his kart. The emerging young driver Alessandro Giardelli (CRG-TM-Vega) closed the weekend in the top-ten being always among the quickest.

LULHAM TAKING OK. The main duel in OK’s qualifying involved Mattia Michelotto (Zanardi-Parilla-Vega), Lorenzo Ferrari (Exprit-Vortex-Vega) and Andrea Rosso (CRG-Parilla-Vega). Some other protagonists emerged in the final stages though: Leonardo Bizzotto (Tony Kart-Vortex-Vega) won in fact Prefinal from the British driver of Forza Racing Chris Lulham (Exprit-Tm-Vega), to Andrea Rosso, who was eventually handed a 10s time penalty. Lulham won then the Final leading Ferrari and Bizzotto. Michelotto crossed the finish line in second place, but a penalty due to the front fairing dropped following a contact relegated him to P11. Rosso was fifth due to an incident when he was charging for P2, and closed his race behind the Dane Gerner Carl-Anton (Zanardi-Parilla-Vega).

BEDRIN AGAIN IN 60 MINI. A spectacular race in 60 Mini ended with a sprint to the line. The victory went to the Russian driver of Baby Race Nikita Bedrin (Tony Kart-TM-Vega), who claimed his second victory in a row leading team mate and fellow countryman Fomin Rusian and the Norwegian Martinius Stenshorne (Parolin-TM-Vega). William Siverholm (IPK-TM-Vega) was fourth proceeding Ean Eyckmans (Intrtepid-Tm-Vega) and Alfio Spina (CRG-Tm-Vega).

The absolute Trofeo delle Industrie Memorial Carlo Fabi was won by Dexter Patterson of OK-Junior, due to his best results in qualifying, Prefinal and Final. The team with the highest number of entered drivers was CRG Spa that fielded 14 drivers. The prize was collected for CRG by KZ reigning World Champion Paolo De Conto.