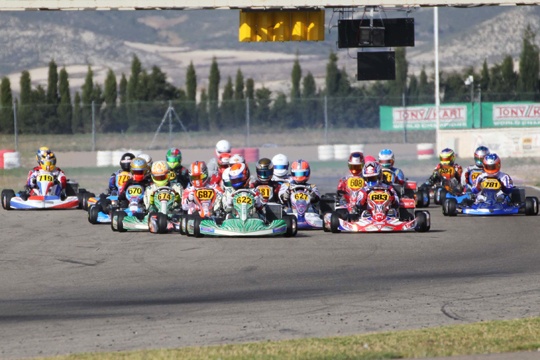 Press Release by: Rotax Euro Challenge
After a record-breaking anniversary season of the ROTAX MAX Euro Challenge the last event the ROTAX MAX International Open from 21st to 27th of October 2013 marked the last highlight of the season for the organising RGMMC Establishment and was a last chance opportunity for drivers, aiming for the ROTAX MAX Grand Finals in the USA.
Scene of action will was the Circuito Internacional de Zuera. The 1.700 metres long track is located in northern Spain right between the cities of Barcelona and Madrid. The race event had been limited to 34 drivers in each category (Junior, Senior and DD2) and was fully booked. So all told about one hundred drivers from 25 nations entered the event, in order to fight for the last tickets to the ROTAX MAX Grand Finals in New Orleans (US). Seven last chance tickets were waiting for the best drivers – three for each category plus one for the best DD2 Masters driver. Moreover the best drivers could win free and assisted places to the 2014 ROTAX MAX Winter Cup and even one complete free season in the 2014 ROTAX MAX Euro Challenge.

David Wooder wins in Junior Category
In the decisive final Zhou seemed the one to be beaten. Yet the Tony Kart driver was not easy to be caught. He led nearly the entire race distance with Ralf Aron and David Wooder in his shadow. When it got to the final spurt the DHR duo increased the pressure and found a way to pass Zhou. Even Philip Hamprecht seized his chance. On the last metres Wooder asserted himself in taking the win, closely in front of Hamprecht, Zhou and Aron.

Jupp kept his Nerve in Senior Category
After being lucky in prefinal Varley and Picot suffered in the final. While Picot was pushed back to eighth place, Varley got involved in a collision and had to retire completely. Contrarily the race developed for Connor Jupp. At an early stage he was able to conquer the lead, which he was able to defend for the rest of the race ahead of Max Aitken. A sensational performance showed Ed Brand. After picking up the final from 28th position the Intrepid driver caught up one place after the other and finally even managed place three on the podium.

DD2: Slavin prevails against Backman and Abbasse
In the final Anthony Abbasse established himself in the lead again. But the Frenchman got a lot of pressure from behind thus putting him back to fourth position in the end. Nevertheless he kept in front of the fifth placed Andreas Backman who was not able to confirm his top performance up to the finish. So other drivers were fighting for the win. Especially Shaun Slavin was in perfect shape. He led the most of the 15 laps and even counterattacked several manoeuvres of his opponents. Finally he won closely ahead of Tadasuke Makino and youngster Rasmus Markkanen. After the race Makino was disqualified for a technical non-conformity, which made the rest move up in the ranking.
In the DD2 Masters classification Martin Pierce (Josh Hart Racing) dominated the whole weekend.

The race winners even won a free and assisted place at the ROTAX Winter Cup 2014. And as a cherry on the cake Jack McCarthy (junior), Max Aitken (senior), Michael Christensen (DD2) and Martin Pierce (DD2 Masters) won a lottery draw, getting a complete free season in the 2014 ROTAX MAX Euro Challenge with a value of 5,400 Euro each. For RGMMC the season is officially over now. But preparations for the season 2014 are already in full swing.