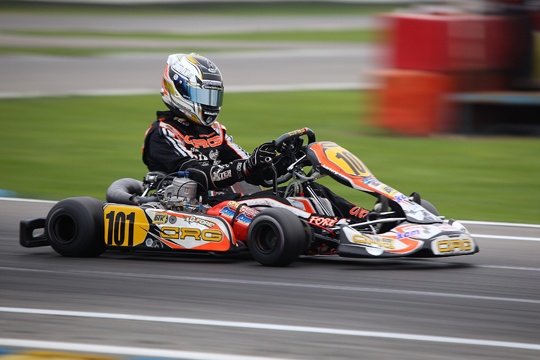 CRG gets to the final round of WSK Final Cup with Dionisios and Kostantinos in KF Junior on TM engines by Galiffa Kart. In KZ2 Forè has been among the main protagonists in free practice.

The final race of the year for WSK is underway in Castelletto with a quite crowded entry list. More than 170 drivers are in fact present to the only round of the WSK Final Cup, a race that will also prove useful to test some new materials ahead of the next season. CRG will line up the Romanian Marcu Dionisios in KF Junior and the Greek Kostantinos, both on Tm engine prepared by Galiffa Kart.

In KZ2 CRG's colors will be defended by Davide Forè who will be racing with the Polish team DTK, while in 60 Mini the Gamoto Racing squad equipped with CRG/Hero chassis is going to be quite numerous as usual and it will comprise the Malaysian driver Abdul Gafar Muizzuddin –  coming from the win in the recent race of the Italian Championship – as well as Noah Watt, Nazim Azman, Fetisov Bogdan and Johany Arsh.

IN KZ2 FORE’ AMONG THE PROTAGONISTS SINCE THE BEGINNING
In KZ2 Davide Forè, on CRG-Tm (team DTK) has been under the spotlight as he proved to be very quick in practice and is quite motivated to get a prestigious result in this last round of WSK. Forè clocked very interesting lap times since free practice where he constantly topped the charts and has also been protagonist in qualifying where he just missed the pole position by just 2 thousands of a second.

“After being the quickest both of Thursday and Friday I was pretty sure I could clinch the pole position  – said Davide Forè at the end of qualifying  – but unfortunately I could not put in the fourth gear in the final two corners and I had to cross the finish line in third. This inconvenience penalized my final time as I could have been a couple of tenths faster. I will try to counter-charge tomorrow in the two heats to earn the best starting place for the final stages.”

The programme of Castelletto's racing weekend will continue on Saturday 2nd November with qualifying heats, while Prefinals and Finals of all categories will take place on Sunday.


All results are available at  www.wskarting.it