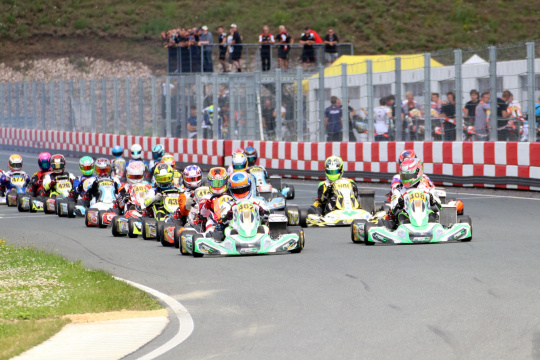 Press Release by: Rotax Euro Challenge
Gunskirchen / Mülsen, July 21st, 2021 – From July 16th to 18th, 2021, the Rotax MAX Chal-lenge Euro Trophy made its debut in the Arena E at Mülsen (GER). For the first time, the Europe-an RMC elite visited the 1,315 metre-long circuit in Eastern Germany, where the third and penul-timate round of the season heralded the crucial phase of the series. The weather was mixed; after sunshine on Friday, the heats took place in rainy weather before the final day was dry again.
Almost 100 drivers were registered, fighting for important championship points again in the season's final spurt. In addition to the four classes of the Rotax MAX Challenge Euro Trophy, the competitors of the Rotax Project E20 Tour were guests for the first time with the innovative electric racing kart from BRP-Rotax. They not only fought for fame and glory, but one coveted ticket for the Rotax MAX Challenge Grand Finals in Bahrain.

Junior MAX: Ethan Jeff-Hall takes first Euro win
Ethan Jeff-Hall (Strawberry Racing) showed a remarkable performance in the junior category. Already in qualifying, the little Brit boosted himself to the top with the best time with a lead of only 0.027 seconds, thus starting the heats from pole position. But the wet conditions on Saturday mixed up the classification dramatically. Ultimately, it was Mikkel Pedersen (RS Competition) who conquered pole position for the first final on Sunday.
The first main race was hard-fought. Up to six drivers rallied for victory before the former Grand Finals winner Farin Megger (JJ Racing) crossed the finish line first. However, the German was not granted the home win. A bumper penalty threw him back to fourth place, so Ethan Jeff-Hall inherited the win ahead of the Dutch duo Bruno Mulders (JJ Racing) and Matthijs Terlouw (Tony Kart).
The second final was also as exciting! Again, seven drivers fought for the lead until Ethan Jeff-Hall was able to break away from the pack at half-race distance, extending his lead lap-by-lap. In the end, the youngster won by a gap of over five seconds ahead over Matthijs Terlouw and Raphael Rennhofer (FM Racing). In the day's standings, Jeff-Hall was also ahead of the game, while Terlouw and Mulders took the following positions. Defending champion Kai Rillaerts (JJ Racing) was not very lucky. He was involved in a collision in the second final and was only able to rescue seventh place. In the championship, however, the Belgian remains in the lead.

Senior MAX: Double victory for KR Sport
With 31 drivers, the seniors represented the largest field in the penultimate race of the season. Above all, Callum Bradshaw (Strawberry Racing) established himself in qualifying. The overall leader in the championship left nothing to chance in the rainy heats and clearly secured pole position for the first final on Sunday.
But on finals day, the tide turned for the Brit and the competition stepped up: Eight drivers fought for victory in the first race and with Callum Bradshaw, Belgium’s Nick Cuppens (Daems Racing), Britain’s Sean Butcher (KR Sport) and Lachlan Robinson (KR Sport) from the Emirates, there were no less than four different leaders. It was only towards the end of the race that Robinson prevailed and was the first to see the checkered flag. Yet, a bumper penalty cost him the victory, which finally team-mate Butcher was pleased to take. Bradshaw got second ahead of Luca Leistra (Bouvin Power).
Robinson struck back in the decisive second final. He quickly fought his way back to the top, withstanding the pressure of his two chasers, Bradshaw and Butcher, until the checkered flag fell. In the day’s standings Robinson had to be satisfied with third place, while Butcher celebrated as the winner. Bradshaw climbed onto the podium in second place and had another reason to be happy; the reigning karting world champion collected enough points to secure the championship crown before the finale in Wackersdorf.

Rotax DD2: One-Two win for Ville Viiliaeinen
The Pole Sebastian Janczewski (Smart Racing Kart) left his mark in the qualifying of the DD2 class. By a blink of an eye, he set the fastest time on the 22-driver grid. But his leading role was unfortunately destined to be short-lived; the qualifying heats in the wet conditions left him down the order towards the back of the field. Meanwhile, Matthias Lund (RS Competition) established himself at the top. With two victories, the Dane took pole position for the first final.
On Sunday, however, Lund’s walkover came to a halt. He had to face resistance from his own squad, namely Ville Viiliaeinen. The Finn was able to pass Lund in the Final 1, winning the race just ahead of his team-mate and Dutchman Martijn van Leeuwen (Schepers Racing). The scene was repeated in the second race. Viiliaeinen again asserted himself with a controlled race ahead of Lund, while this time the Czech Jakub Bezel (KSCA Sodi Europe) completed the top three. In the day’s standings, RS Competition celebrated a clear double victory with Viiliaeinen and Lund, while Jakub Bezel climbed onto the podium in third place. In the championship standings, Petr Bezel (KSCA Sodi Europe) defended the lead.

DD2 Masters: Louveau wins championship
The DD2 Masters witnessed a thrilling duel at the Arena E, the main contenders being the German Michael Becker (CompKart) and Frenchman Paul Louveau (Redspeed). While Becker was in the lead in qualifying, Louveau struck back in the heats. In the two final races, the duo were also challenged by round 2 winner Alessandro Glauser (FM Racing), who suffered a retirement while leading in Final 1, thereby losing his chances of taking the championship victory in 2021. The front-runners, however, fought a remarkable duel with several changes of the lead. In the end, however, Louveau prevailed in both finals. The Frenchman not only won the day's ranking, but secured the Masters’ title. Becker finished second on the podium in front of Christophe Capitaine (Kart Runner) from France.

Rotax Project E20 Tour: Kekati wins the day's ranking
14 drivers competed in the first race of the Rotax Project E20 Tour Euro Series fighting for the coveted ticket for the RMC Grand Finals 2021 in Bahrain this December. The first step in this direction was taken by DEKM driver Ellis Spiezia, who was able to take his maiden pole position in Rotax eKart qualifying. The rain on Saturday resulted in the American dropping down the order, while fellow DEKM competitor Theo Kekati asserted himself at the top. The Abu Dhabi teenager from the United Arab Emirates seized pole for the first race on Sunday and got into a close battle with the German Nikita Gense, which he ultimately won in a photo finish by 0.005 seconds. Gense received a bumper penalty post-race and had to leave the way to the Czech Jan Matys and the Austrian Mete Argun.

In the second final, Spiezia struck back impressively: starting from sixth place, he fought his way through to the front, finally celebrating his first victory in the Rotax Project E20. Kekati followed behind in second place, with a respectful lead over Gense. In the event’s ranking, Kekati won and was awarded the ticket for the RMC Grand Finals. The podium was completed by Spiezia and Matyas.

Meik Wagner: “It remains exciting"
Meik Wagner, organizer of the RMC Euro Trophy, was satisfied with the penultimate round of the season: “Our debut in the Arena E went very well. We saw exciting races during all weather conditions – without any major incidents. In the end, we celebrated well-deserved winners and already saw two title decisions. My congratulations! Nevertheless, it will still be exciting for the big finale, since two more classes have not yet been decided and seven out of nine Grand Final tickets are still waiting to be awarded. "

The Rotax MAX Challenge Euro Trophy is now entering the summer break, but the RMC racers are already looking forward to the big showdown. From September 3rd to 5th, 2021 the Prokart Raceland in Wackersdorf will be venue of the final round, where all titles will be awarded and a total of nine drivers will receive their tickets for the Rotax MAX Challenge Grand Finals in Bahrain. Moreover the second edition of the Rotax Project E20 Euro Series will be part of the event again, where the winner of the round and the championship will also take home a RMCGF ticket, All information about the Rotax MAX Challenge Euro Trophy is available on the web at www.rotaxmaxchallenge-eurotrophy.com.

About BRP-Rotax:
BRP-Rotax GmbH & Co KG, a subsidiary of BRP Inc., located in Gunskirchen, Austria is a leader in the development and production of innovative 4- and 2-stroke high performance Rotax engines for BRP products such as Ski-Doo and Lynx snowmobiles, Sea-Doo watercraft, Can-Am all-terrain, side-by-side vehicles and Can-Am Spyder lineup as well for motorcycles, karts, ultra-light and light aircraft. In the last 50 years, the company has developed more than 350 engine models for recreational vehicles and produced over 9 million engines.
www.rotax.com
www.rotax-kart.com

About BRP
We are a global leader in the world of powersports vehicles and propulsion systems, built on over 75 years of ingenuity and intensive consumer focus. Our portfolio of industry-leading and distinctive products includes Ski-Doo and Lynx snowmobiles, Sea-Doo watercraft, Can-Am on- and off-road vehicles, Alumacraft and Manitou boats, Evinrude and Rotax marine propulsion systems, as well as Rotax engines for karts, motorcycles and recreational aircraft. We support our lines of product with a dedicated parts, accessories and clothing business to fully enhance your riding experience. With annual sales of CA$5.2 billion from over 120 countries, our global workforce is made up of around 12,500 driven, resourceful people.
www.brp.com