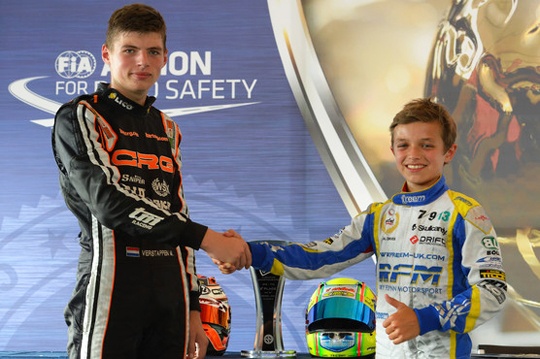 Press Release by: FIA Karting
The meeting at Ortona was run with heat in the air as well as on the track. The wide, long and fast Italian track was the scene of battles at all levels between the participants in the European Championship.
The suspense lasted until the end of the finals when the names of the two title-winning drivers were revealed, Max Verstappen in KF and Lando Norris in KF-Junior. The Belgian Maxime Potty retains the lead in the standings of the Academy Trophy, but the Brazilian Pedro Piquet won both races.
Three weeks after being crowned European Champion in KZ at Genk, the Dutchman Max Verstappen (CRG-TM-Vega) repeated the achievement in KF this weekend, a unique performance at this level. However it was the Danish driver Nicklas Nielsen (Kosmic-Vortex-Vega), who won at Alcaniz in the first round of the championship, who dominated the early stages of the competition with his fastest time in qualifying and the lead after the qualifying heats. The formidable test of the two pre-finals saw the Polish driver Karol Basz (Tony Kart-Vortex-Vega) and Verstappen win to take the front row of the final. Pushed off the track on the first lap, which then forced him to retire, Nielsen unfortunately could not defend his chances as he deserved. A long duel between Verstappen and Basz began for victory and the European title. The gap remained tight between the two contenders while the French driver Valentin Moineault (ART GP-TM-Vega) drove fastest laps to come back from 15th place on the grid. The impossible happened at the finish when Basz attacked Verstappen and Moineault took the opportunity to pass both at once before heading to victory. In second, Verstappen knew the championship was his, especially as Basz finished fourth behind Jordon Lennox-Lamb (CRG-BMB-Vega), who was then penalized for a bad maneuver on Nielsen.

Three drivers found themselves tied on points at the end of the final in KF-Junior, which gives an idea of ​​the intensity of the competition. The hero of the weekend is undoubtedly the British driver Daniel Ticktum (FA Kart-Vortex-LeCont) who was the polesitter in qualifying, the leader at the end of the heats, and victorious in the prefinal and final. He couldn't do better. This offset his non-qualication at Alcaniz, but not enough to win the Championship, only for second place. While Lando Norris (FA Kart-Vortex-LeCont) had a hard time in Italy, finishing only 25th in the final, he still participated in both finals and took one victory. The other title contender was the Dutchman Martijn Van Leeuwen (Zanardi-TM-LeCont), third in Spain and seventh in Italy. He therefore ranks third in the Championship. The other main protagonists of the class were Leonardo Pulcini (Tony Kart-Vortex-LeCont) who had a brilliant second half of the final to finish second and Enaam Ahmed (FA Kart-Vortex-LeCont) who was on the third step of the podium. It is hard not to talk about the Canadian Parker Thompson (Energy-TM-LeCont), who arrived in Ortona to contest the title, was ranked third after the heats but was eliminated in his prefinal.

The Brazilian Pedro Piquet, the son of the F1 Champion, won in both races of the Academy Trophy, marking a significant increase in performance from the meeting at Genk driving a Parolin-FIM-Vega, like all other participants in this competition. Constantly in the leading group from free practices, he came out in third position after the qualifying heats. Shoulder to shoulder with Maxime Potty (Belgium) in race one, he won the duel on the last lap. It was easier in race two when it was enough to manage the recovery of the Belgian, who was delayed at the start. With a total of 146 points, Piquet is in second place in the standings behind Potty, deservedly installed in the lead with 185 points. Other strong performers of the weekend were Ralf Aron (Estonia) who was third in race one, Berkay Besler (Turkey) in third position in race two, and Adeline Prudent (France), for the FIA Women in Motorsport programme, 5th in race one and courageously recovering after being pushed out in race two.