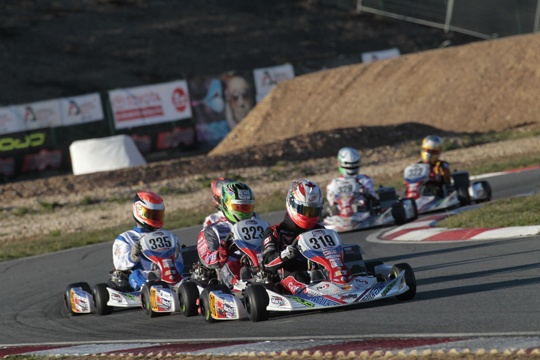 Mach1 Kart’s first Rotax MAX Grand Finals are over and they’ve been a great success. As sole supplier in the DD2 class, the German kart manufacturer broke new ground and was able to satisfy due to a high power density and quality “made in Germany”. After six exciting racing days, Canadian Ben Cooper crossed the finish line as the victor.
A huge challenge awaited Mach1 Kart at the end of the season in the form of the Rotax MAX Grand Finals in Portuguese Portimao. The manufacturer travelled to Portugal with a new racing truck and brought 80 brand-new Rotax DD2 Karts along with them. The great preparation of the team surrounding Martin Hetschel definitely paid off. The DD2-field was able to impress during free trainings already due to a high power density. During qualifying, as many as 40 drivers ranked within a second.

Fastest driver of the weekend was Canadian Ben Cooper: After coming in fourth during qualifying, he stormed to the front during the Heats and wouldn’t let go of his lead during pre-finals and finals. When crossing the finish line at the finals, he had an advance of close to a second and won ahead of Konstantins Calko from Latvia and Belgian Mathias Detige.

Mach1 Motorsport team leader Martin Hetschel was very content with the final week: “Everyone did an amazing job. Our karts worked perfectly and the drivers were thrilled with our product. We’ve received lots of positive feedback and are very happy to have presented ourselves so well in front of a wide international audience.”

What the drivers said about Mach1:
"Dear all at Mach 1, we would like to thank you for the help you gave us at the World Finals, nothing was too much trouble for you and even though we had bad luck on the circuit we had no complaints about the chassis. Thanks again and good luck for 2013!” (#342 Lucas Orrock /UK)

"Goodnight there! My son is a kart racer here in Brazil and he's competing the Rotax Grand Finals in Portugal with the kart number 352. Nelsinho (my son) is a professional racer in Brazil and I got really impressed about the quality and details of your karts! Congrats for the quality of your karts.” (#352 Nelson Stanisci Junior/ Brazil)

"Hi Martin, Firstly, thank you very much for all of your help, I thought the support from Mach1 was excellent. (#330 Tom Holland / UK)"

To everyone who is interested: The world final karts are up for sale now. The new Mach1 DD2-Chassis is based on the successful Mach1 FIA9 model, has got a 30mm framework, two front stabilizers and sniper adjusters for caster adjustments. Additionally, an in-house developed HRP-2-two-cycle braking system with balance adjustment, a typical glue set (incl. floor panel decoration) and aluminium front-wheel hubs of the 2013 model top the kart off. These have been in use for a maximum of three hours, are generally overhauled and will be sold with exclusive accessories. These include a set of DWT magnesium-rims with used Mojo D3 tires (slicks), a set of HRP aluminium- rims with used Mojo W2 tires (rain), a Tillett T12 seat, a bench tested engine Rotax MAX DD2 and additional gear ratios. As is Rotax-characteristic, there is an additional 6-months-guarantee on the engines. If you decide to buy a kart until December 30th 2012, you can even receive the extended guarantee of 12 months.

After the exhausting world final, Mach1 Motorsport is already looking into the future now. In 2013, the team is planning to start at the Winter Cup in Lonato, the WSK Euro Series, the DKM, the CIK-FIA Kart European Championship and the national series ADAC and DMV. The team will be at all of these races with their new team truck and will try to cause quite a stir again.