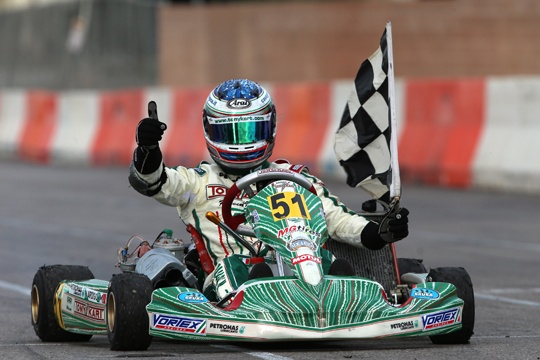 Marco Ardigò won the sixteenth edition of the SuperNationals USA in Las Vegas. Our wonderful driver, racing an extraordinary Racer EVK powered by Vortex RVXX, won the most important race of the American scene, the one reserved to the KZ2 category. In the gambling capital of the world, the “Green” Tony Kart has won again, for the third time in five years only.
The performances of our drivers were great starting from the first free practices sessions. Ardigò and Dreezen were immediately among the first positions and then, laps after laps, also our other official drivers Torsellini, Piccini and the American Nick Neri found the right pace. The course of the race, created within the parking area in front of the Rio Hotel & Casino, has been improved compared to last edition and it was, once again, congenial to our technical material. During the qualifying heats, Marco Ardigò signed the second time with 43.615 and Rick gained the fourth time with 43.771. During the three heats, determining the final starting grid, Ardigò raced with his usual efficacy always having clear in his mind the main aim: gaining the best position in the final starting grid.

In this way Ardigò, with a third, a fourth and a second place, gained the third position in the starting grid. In the heats Rick Dreezen was always on the wake of the first drivers, but in the second race of the qualifying heats he was forced to withdraw. In the Final Ardigò exploited the potential of his Tony Kart in the best way and he waited only 4 laps, of the twenty-five in the schedule, before going into action. At the fourth lap Ardigò overtook Hajek and Verstappen and sprang forward to his third SuperNationals title. The chequered flag signed the third American victory of Marco Ardigò and of the Racing Team, this is a record considering that this event is at its fifth edition. The final of the SuperNats didn’t smile on Rick Dreezen, he was among the first drivers and he had all the conditions necessary to achieve a step on the podium, but unfortunately he lost this possibility soon. Mirko Torsellini’s result was positive too, author of a great performance during the whole weekend he ended the race in sixth position.

It is important to underline that the victory of the XVI°
Supernationals is the second win for our new Racer EVK. In fact the new model made his debut less than one month ago on the occasion of the KF1 World Championship in Macau and he gained a victory with Flavio Camponeschi too. Thanks to the many successes gained in all the categories, the standing out colour of this fantastic event in Las Vegas was the “Green” Tony Kart. The KZ2 category has been won by our official driver Marco Ardigò, however also in the other classes many private drivers reached the success using the technical material produced in our Italian factory.