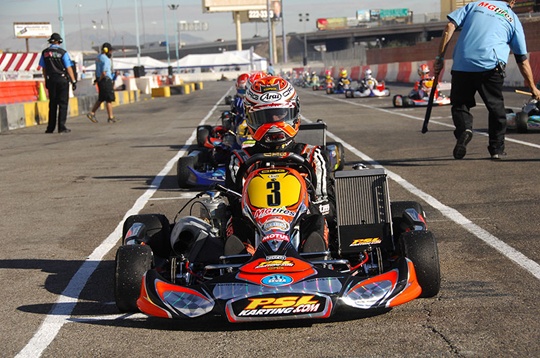 SKUSA SUPERNATIONALS XVI – LAS VEGAS, 16th-18th NOVEMBER 2012
Pex is fifth in the KZ2 final
After winning qualifying, Max Verstappen is forced to retire in the final for a technical issue occurred to his spark plug. Jorrit Pex is fifth. Good performances also for the Crg drivers in S1, with Fritz Leesmann, and in D2 with Sabrè Cook.

Sometimes the podium of a race should have a step more for the 'moral winner' of the event. In Las Vegas, that step should have been occupied (a joy more for everyone) by the CRG driver Max Verstappen, great protagonist of the last, traditional appointment of the year in the United States. He was the fastest throughout the whole weekend, but also dogged by bad luck: victory slipped off his hands when it was really close.

VERSTAPPEN PROTAGONSIT ON CRG. It is true that what really counts is the actual victory; but it is also true that there can be a moral winner next to the real winner. That was the case with Max Verstappen on CRG in Las Vegas, at his first experience on the winding streetcircuit set in the car park in front of the Hotel Rio and at his first kilometres in the gearbox category, the KZ2, where he immediately found himself at his ease (see the recent World Cup).

Behind the wheel of the CRG chassis, model Road Rebel powered by TM, racing in Las Vegas for PSL Karting (CRG Canadian importer), Max Verstappen was by far the fastest of the pack: from the best lap in the time trials, to the victory in all the heats. Then, unfortunately, Max was forced to retire for a minor technical issue with is spark plug, after one third of the Final, when he was leading and ready to celebrate victory.

“Whole week went fantastic - commented Max Verstappen - and then in the final, while in leading position, the spark plug broke... I'm really disappointed because CRG,PSL,TM deserved this victory! Anyway I learned a lot this week again and will comestronger out of it. Interesting news will follow soon..."

This is Max Verstappen's comment, who was deprived of victory in the most important American race only by misfortune. And for 2013 Max Verstappen could be fully committed in the gearbox category, for sure very similar to a single-seater if thinking about his future in car racing.

GREAT PERFORMANCE FOR PEX IN THE FINAL. Also Jorrit Pex's performance in Las Vegas was good. He is the otherchild prodigy of CRG Holland: he is this year's CIK-FIA KZ1 European Champion and WSK Euro Series Champion. After a good qualifying (fifth in practice and then 7th, 5th and 4th in the heats), Pex did an excellent final, placing fifth behind Ardigò, winner of the Final and Abbasse, Hajek and Lammers.

Euan Jeffery, CRG team manager: “CRG drivers had a good experience here in Las Vegas. Max Verstappen could have won, but a minor issue with the spark plug prevented him from winning the race of Las Vegas. Jorrit Pex did very well too, always among the best. Pex placed fifth, confirming the qualities of the CRG chassis, the leading actor also on winding circuit such as the one of Las Vegas. Excellent the second place achieved by the Californian Fritz Leesmann in the S1 category, powered by Honda and assisted by PSL, winner of the national championship and also 7th in KZ2. The women's title of the S2 category went to Cook Sabré from Colorado. She ran with CRG USA.”

All the results on www.superkartsusa.com