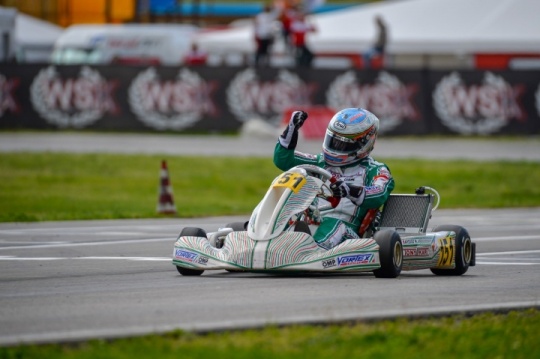 Press Release by: Tony Kart
On the circuit of Sarno, Marco Ardigò has cleaned out the KZ2 category
On the circuit of Sarno, Marco Ardigò has cleaned out the KZ2 category and now he is ready for the final sprint of the WSK Super Master Series.
After almost a year of break due to his injury to the ribs occurred during the opening round of the CIK-FIA European Championship 2017 in Sarno, Marco Ardigò is back on the top step of the podium on the Naples track, in KZ2.
Marco was leader in the second round of the WSK Super Master Series thanks to the performance of his Tony Kart 401S Racer chassis powered by the Vortex engine: he got indeed the pole position in the qualifying with 56”307 as well as the victory in the three eliminatory heats, in the prefinal and, undoubtedly, in the Final. The victory in the prefinal, then, paved the way for the absolute win in the Final of his category. Ardigò is now leader of the general ranking.
Also the Finnish Simo Puhakka defended our colors together with Ardigò, even though he was not so brilliant at the beginning of the race weekend but author of a great comeback in the Final, where he was able to climb 13 positions, ending with a well-deserved bronze medal. Matteo Viganò and Alessio Piccini unfortunately failed to do the same: the first was forced to retire in the Final after three excellent second consecutive places in the eliminatory heats, while the second ended the weekend in Naples in a 13th position not rewarding enough his being fast, also considering he was the author of the fastest lap of the weekend (55''851).
In OK class Noah Milell, first took the fifth place at the end of the qualifying heats and got the lowest step of the podium in the prefinal. In the Final, however, he could not go beyond the 11th absolute position, a result that made him slip into sixth place in the general ranking. David Vidales, even though he had a weekend featured by many collisions occurred with his rivals, has nevertheless been able to highlight his potential with a second place in a heat.
As for the weekend of our drivers in the OKJ category, the best was Laurens Van Hoepen, good at entering the top ten in the Final after a comeback of 11 positions. On the other hand, Josep Maria Martì and Sebastian Montoya failed to express their talent, as did our drivers in the 60 Mini category: Jimmy Helias, Yuanpu Cui, Igor Cepil and Rashid Al Dhaheri.
The next competitive round for our Racing Team will be again on the International Naples circuit of Sarno hosting the final act of the WSK Super Master Series on the weekend of April 5th-8th. 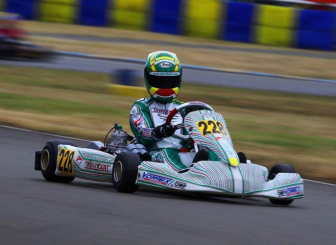