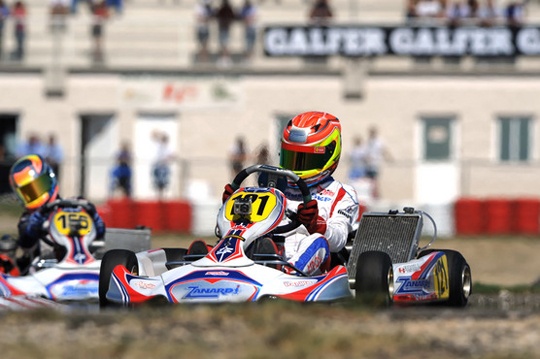 Press Release by: FIA Karting
CIK-FIA KF2 and KF3 World Cups
The Qualifying Heats have given their verdict at Zuera, venue for the KF2 and KF3 World Cups. In both categories, the 34 Finalists are now known and they can concentrate their minds on the final phase. As could be anticipated, the contest was extremely open in KF2, where Max Verstappen took pole position for the Prefinal. In KF3, the Canadian Lance Stroll maintained the advantage he had gained in Qualifying Practice. But in the two categories, only the winner of the Final will leave Spain with a World Cup!
by CIK-FIA P.O.

Just for once, there were no major surprises in the Qualifying Heats for the KF2 World Cup. Having each won three Heats out of four, the Dutchman Max Verstappen (CRG-TM) and the Italian Felice Tiene (CRG-BMB) certainly left their mark. On equal points, they were separated by their Practice times and so it is the son of the ex-Formula 1 driver who will start the Prefinal from pole position. In their wake, the Briton Jordon Lennox-Lamb (CRG-BMB) also stood out, with two wins and a 3rd place in the intermediate classification… giving the impression of having intelligently managed the Qualifying Heat stage.

Both winners of one Heat, the Dane Nicklas Nielsen (Kosmic-Vortex) and the Norwegian Dennis Olsen (with the best time in Practice in his Energy-TM) were behind them, as were the European Champion Ben Barnicoat (ART GP-Parilla), the Italians Matteo Vigano (Top Kart-Parilla) and Antonio Fuoco (Kosmic-Vortex) and the Spaniards Pedro Hiltbrand (FA Kart-Vortex) and Carlos Gil (Tony Kart-Vortex). Among the pre-Race favourites, in 11th place was the Frenchman Anthoine Hubert (FK-Parilla), in 16th the Monegasque Charles Leclerc (ART GP-Parilla), held up by contact with another competitor in one Heat, in 19th the Italian Flavio Camponeschi (Tony Kart-Vortex) and in 22nd the Briton Sam Snell (Energy-Parilla), who lost a number of places after abandoning one Heat with a mechanical problem.

On Sunday the contestants for this World Cup will have to overcome the stumbling block of the Prefinal, which will determine the starting grid for the Final. The 34 remaining will then have 18 laps on which to prove themselves, and the battle will certainly be as hot as the Spanish track!

Already fastest during Friday’s Qualifying Practice, on Saturday the Canadian Lance Stroll (Zanardi-Parilla) completed the Qualifying Heats for the KF3 World Cup in the lead. With three wins, the competitor from the Ferrari Driver Academy took pole position for the Prefinal, which will in turn determine the starting grid for the Final for this category (for 13-15 year-olds). Behind him, the great surprise came from Luca Corberi (Kosmic-Vortex). Only 21st in Qualifying Practice, the Italian confirmed that his 5th place in the last European Championship was not by chance with repeated fight-backs in his five Qualifying Heats, even taking three wins. He took 2nd place in the intermediate classification ahead of local Guillermo Russo (FA Kart-Vortex), the Frenchmen Bryan Elpitiya (Zanardi-Parilla) and Gabriel Aubry (Birel-TM) and the Italian Simone Cunati (Top Kart-Parilla). The Top 10 was completed by the Dutchman Martijn Van Leeuwen (Zanardi-Parilla), the Spaniard Javier Cobian (FA Kart-Vortex), the Russian Nikita Sitnikov (Tony Kart-BMB), winner of three Heats but involved in a collision at the start of the last confrontation of the day, and the Italian Alessio Lorandi (Tony Kart-Vortex). Winner of two Heats, Brazil’s Vitor Baptista (CRG-BMB) also lost some places after being hit in one Heat, to finish in 11th position for the Prefinal.

These Qualifying Heats also threw up some surprises. Only in 14th place, the European Championship runner-up, Spain’s Alex Palou (CRG-BMB) lost several places in the intermediate classification after being the victim of a rather ambitious attack by George Russell (Intrepid-Vortex). The double European Champion was penalised for the manoeuvre and was also excluded in one Heat for a part of the bodywork on his kart not complying with the homologation sheet. Classified 31st, the Briton rightly gained his ticket for the final phase, but he knows his task will be difficult. Also excluded following a bodywork check, the Frenchman Dorian Boccolacci (Intrepid-TM) finished 20th. It is to be noted that the Britons Daniel Ticktum and Callum Ilott (both on Zanardi-Parilla) were both held up (a collision for the former and a stalled engine for the latter) although they each confirmed their fast pace to win a Heat. In the intermediate classification, they are 19th and 22nd respectively, well ahead of the fast Frenchman Paolo Besancenez (Sodi-Parilla), who may regret his engine refusing to start and a collision setting him back to a 32nd place which does not reflect performances on the track. So these are certainly among the Drivers to follow in the final phase which promises to be particularly exciting!