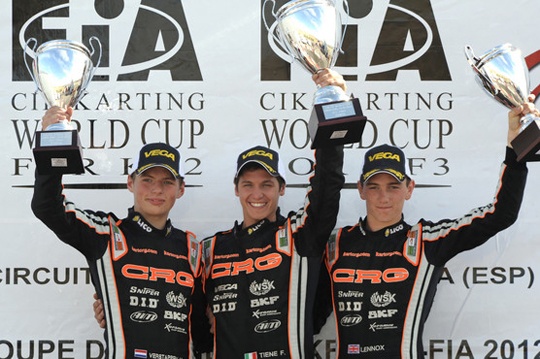 It was sun and warmth all the way in Zuera for the World Cup for KF2, the “Hopefuls” category. Under those conditions, it was still necessary to keep a cool head… Perfectly managing the Prefinal, the Italian Felice Tiene (CRG-BMB), the Dutchman Max Verstappen (CRG-TM) and the Briton Jordon Lennox-Lamb (CRG-BMB) held the first three places. Although these three team-mates monopolised the front of the grid for the Final, Nicklas Nielsen (Kosmic-Vortex) was not so happy. Involved in a collision, the Dane had to be content with 17th place on the grid. For the others, the suspense was tangible prior to the Final and no possibility could be discounted…

But for all that the Final was exceptionally clear cut. Whilst Max Verstappen was a little slow of the mark, Felice Tiene maintained the advantage of pole position to sail to a victory which was never in doubt. Behind him, Verstappen made a gradual fight-back, getting the better of Jordon Lennox-Lamb a third of the way through the Race. But he was never able to close the gap on the leader. As for Lennox-Lamb, he fought hard with his compatriot Tom Joyner (LH-BMB) to hold on to third place, thus ensuring a 100% CRG podium.

“I’m delighted for myself, but also for the CRG team, who are really my second family,”Felice Tiene explained. “Ever since first Free Practice on Thursday I have felt I could win. I know that’s easy to say, because you still have to cross the line first… this win is the best of my career and can only strengthen my relations with CRG!”

A good way back from the top four, Monaco’s Charles Lerclerc (ART GP-Parilla) was the best of the rest, ahead of his team-mate Ben Barnicoat. Another Brit, Sam Snell (Energy-Parilla), finished in 7th place, after only starting from 21st position. The Top 10 was completed by the Italian Alberto Di Folco (Tony Kart-TM), the Dane Nicklas Nielsen, who posted the fastest lap and could only rue his misadventure in the Prefinal, and the Russian Pavel Rudakov (Tony Kart-BMB).Just as he was about to join the Top 5, the Italian Flavio Camponeschi (Tony Kart-Vortex) had to pull over with a technical problem. Other favourites had already been forced to abandon, particularly in the muddle of the early laps, among others the Italian Antonio Fuoco (Kosmic-Vortex) and the Spaniards Carlos Gil (Tony Kart-Vortex) and Pedro Hiltbrand (FA Kart-Vortex). As for Norway’s Dennis Olsen (Energy-TM), he ended the first lap in 27th position and then climbed back up to 12th place, not an entirely satisfactory result for him.


KF3 World Cup: Corberi out on his own

More than motivated by what was at stake, competitors for the KF3 World Cup were under great pressure at the start of the Prefinal for this World Cup for 13-15 year-olds. On the over-heated tarmac of the Zuera circuit, it was vital first of all to survive the relative confusion of the pack unscathed… Among the leaders, Guillermo Russo (FA Kart-Vortex) continued his dream weekend on this track situated a mere twenty kilometres from his home. In fact the Spaniard won the Prefinal, thus taking pole position for the Final ahead of the Russian Nikita Sitnikov (Tony Kart-BMB), the Canadian Lance Stroll (Zanardi-Parilla), the Italian Alessio Lorandi (Tony Kart-Vortex) and the Spaniard Alex Palou (CRG-BMB), who saw his odds shorten when he climbed from 14th to 5th place. Among other fight-backs were those by the Britons Daniel Ticktum and Callum Ilott (both Zanardi-Parilla), finally 8th and 10th after starting from 19th and 22nd positions, and also the Frenchman Paolo Besancenez (Sodi-Parilla), 9th after starting from 32nd position. In contrast, several drivers had to relinquish dreams of winning after various collisions: the Frenchmen Bryan Elpitiya (Zanardi-Parilla), Gabriel Aubry (Birel-TM) and Dorian Boccolacci (Intrepid-TM) and the two-times European Champion, Briton George Russell (Intrepid-Vortex) in fact ended at the back of the starting grid for the Final.

Nerves were still jangling for the Final. After three laps, spectators could no longer tell who was in the lead after numerous overtaking manoeuvres. And then, in a thrice, one Driver took advantage of a slight jostle to pull out a decisive lead. “The early laps went perfectly for me,” recalled Luca, practically born on a karting track (he is the son of the owner of the Lonato track). “I made a good start from 11th place and then I overtook one, two, even three Drivers a lap. Then I was in the lead and realised that there was a considerable gap between me and the rest. I was a little lucky, but I just had to make sure I was not overtaken. So I just tried to keep my advantage and it all worked perfectly.”

This win for the Italian was also a win for the Kosmic Racing Department team, managed by Olivier Maréchal. Little more than a week after the death of his father Roland, who was one of the most iconic kart tuners in his time, this success was welcomed with considerable emotion.

Driving extremely quickly, as his fastest lap illustrated, the Briton Callum Ilott was 13th after the first lap. He rapidly climbed back to take second place ahead of the Dane Slavko Ivanovic (Tony Kart-Vortex), who profited from a penalty imposed on the Russian Nikita Sitnikov to take the lower step on the podium. On his home soil, Alex Palou (CRG-BMB) had to be content with 4th place ahead of the Briton Connor Jupp (FA Kart-Vortex), who climbed from 33rd place (!) on the grid, the Italian Alessio Lorandi (Tony Kart-Vortex), the Brazilian Vitor Baptista (who started 26th with his CRG-BMB), the Frenchman Paolo Besancenez (Sodi-Parilla), who lost several places in the battle for second place, and the Spaniard Albert Gil (Tony Kart-Vortex). Completing the Top 10 was Canada’s Lance Stroll (Zanardi-Parilla), one of the victims of the attack by the Russian Sitnikov which caused the latter to receive the penalty relegating him to 11th position. The other major victim was the unfortunate Guillermo Russo, who saw his dreams of victory on home soil disappear in a flash with the manoeuvre… A World Cup is definitely a test like no other. Perhaps that is what makes victory taste so sweet!