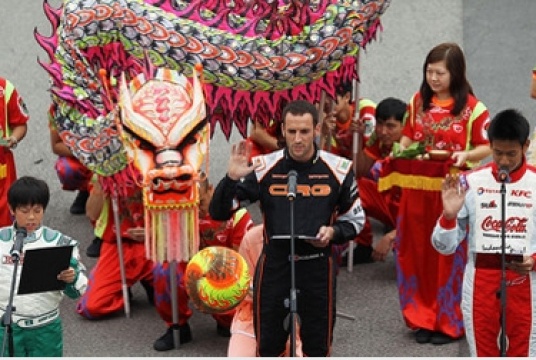 Mecca of Asian Motorsport through its traditional Formula 3 GP (and since a few years through the final of the World Touring Car Championship, WTCC) held in the streets of the peninsula, Macau also gives Karting its due and, despite the exiguity of the territory, comprises a permanent Karting track of over 1,000 metres. This circuit, located on the Coloane Island, had in fact hosted the maiden World Championship organised on the Asian continent.

Pending the organisation of another world event in 2012 (the fifth and last round of the World KF1 Championship), Macau will be this weekend the venue of the CIK-FIA Asia-Pacific Championships of the KF1 and KF3 categories.
On the list of results of the KF3 Championship, which Driver will succeed Matthew Graham, who in the meantime has also grabbed the “U18” World Champion title? A few European Juniors will make the trip, in particular Alessio Piccini, son of the four-time World Formula C Champion. Piccini is familiar with the event as he participated in the 2010 edition and finished fifth. Amongst the Asians who constitute the main part of the field, three competitors will be in a position to exploit the experience they gained in the CIK-FIA Academy Trophy: Jehan Daruvala (India), Jacky Chan (Hong Kong) and Macau’s local Driver Wing Chung Chang.

In KF1, the Tony Kart et CRG works Teams have decided to make the trip with some of the Drivers they had entered in the World Championship: Flavio Camponeschi for Tony Kart, Laura Tillett, Jordon Lennox-Lamb and Felice Tiene for CRG. Very much in the public eye in KZ1 throughout the 2011 season (Vice-European Champion and World Cup runner-up), Belgium’s Yannick de Brabander will make a comeback in KF1 and his Macau entry by Formula K leads one to think that this ambitious Team will be involved in all the CIK-FIA categories in 2012. Birel is not present with its official Team but its interests will be represented by its Japanese importer, who will compete with Bryan Homi Mehta and Daiki Sasaki. And, finally, Macau will see for the first time some brilliant KF2 Drivers make their début in KF1, for example the Dane Nicolaj Moller Madsen, Thailand’s Tanart Sathientirakul, the Spaniard Pedro Hiltbrand and Indonesia’s Ricardo Gelael Sean.

The programme of the meeting will be completed by the final round of the Asian Zone Karting Open Championship (AKOC).
The results of the CIK-FIA KF1 and KF3 Asia-Pacific Championships will be published in real time on www.cikfia.com