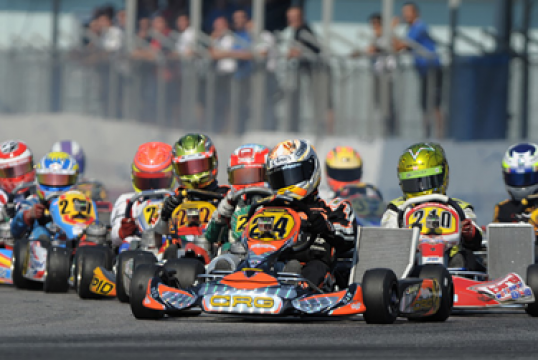 Not all the races are alike for the CRG Racing Team! Two weeks after a new victory by Jonathan Thonon at the World Cup for KZ1 and seven podiums conquered in Belgium, disappointment became the prevailing feeling in Italy. On the circuit of Sarno, Max Verstappen felt his world crumbling around him after a race accident deprived him of a possible victory in KF3.


As for Felice Tiene, he also experienced a big disappointment at the World KF1 Championship. But this is the hard law of motor sports, though engineers of the Italian brand could see once again the continuous progress made by CRG chassis and Maxter engines.

KF3: Verstappen Believed He Could Make It
Max Verstappen has dominated the WSK Euro Series KF3 for two seasons, but success keeps turning its back on the CRG driver in the European and World Championships organised by the CIK/FIA, although not for lack of competitiveness, which he displays every time. This was again the case at Sarno. After setting the second fastest time in timed qualifying, a mere two hundredths short of pole position, Verstappen won as many as five qualifying heats (out of six), including the one where he raced against the future champion.
The second place of the Dutchman in the pre-final allowed him to continue to firmly believe in his chances. "In a Word Cup you take all your chances in just one final and I knew everything could happen", Max confessed. "As a consequence, I was determined to give it all to reach my goal". Unfortunately, starting on the outside of the front row is not always the ideal situation and Verstappen got boxed in at the start. However, he quickly regained the second place, though a duel with another driver sent him off the course. After he went back on the track he had an electrical problem, while the CRG driver had not said his last word for the podium, yet. A big deception that Max Verstappen is determined to forget, in order to make his way to victory again very soon.

KF2: LH Shines With Joyner
In the sun of southern Italy, the Brit Tom Joyner put the colours of Lewis Hamilton and the LH chassis in full display. Joyner was one of the very few drivers who won at least two qualifying heats. His level of performance had raised hopes of an excellent result, but a crash at the start of the pre-final put paid to all his chances. Unfortunately the final ended with another retirement!

KF1: Among the Fastest
As in Belgium, engine tune-up specialists of the Italian brand Maxter enabled again CRG drivers to achieve excellent performances on Sunday, after a Saturday to forget. But right after crossing the finish line in second place with a best lap time in Race 3, Felice Tiene was excluded for a not-so-evident technical non conformity. Jordon Lennox-Lamb and Laura Tillett, Tiene's team mates, hoped to take up the baton before being struck by bad luck, too.