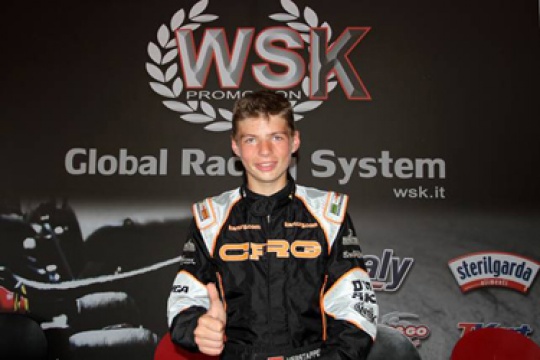 In the first racing day, Tiene is very performing in KF1 and is the runner-up on Crg in the first Saturday final behind de Vries who wins the championship. Torsellini achieve the pole position and wins in KZ2. Good Verstappen in the KF3 heats.


Zuera (Spain). Whatever happens now in this fourth and last event of the WSK Euro Series in Spain, CRG official team can leave the international circuit of Zuera with head high: the team’s efforts and the good results achieved in the first of the two racing days say it all.
Great satisfaction for the CRG-Maxter official karts also – and finally – in KF1, after a season which had not started as expected. In Spain, in the time trials, Laura Tillett (4th), Felice Tiene (7th) and Jordon Lennox-Lamb (9th) managed to reach easily the first positions and they also did very well in the Superpole, reserved to the first ten drivers.
In the two Saturday heats, the most effective driver was Felice Tiene, who got two third places. In the final, the Italian driver did even better: he finished second just behind Nick De Vries (Zanardi), who won the KF1 WSK Euro Series championship before the Sunday final. De Vries’s win was a great satisfaction for CRG, because the Zanardi chassis is produced by the Italian firm. In the first final, Lennox placed 15th, while – unfortunately – Laura Tillett was forced to retire.
But the most striking event of this Spanish weekend was doubtlessly Mirko Torsellini’s performance. The Italian driver from Siena achieved a terrific pole position in KZ2 on his CRG-Maxter (he was overall first in the general ranking, even taking into account the higher category, the KZ1).
Then he got an overall second place and a first place in the two heats, then an overall second in the final: after a gripping sprint final he placed between Dreezen and Piccioni, largely winning his category, the KZ2.
Now Torsellini has reduced to 28 points the gap with the Swedish Joahansson. Sunday second final will be decisive: here Torsellini, to get the KZ2 title, will need to win again and hope that Johansson will not do better than a third place.
The Belgian Dreezen – in KZ1 – is just a step away from the title, while Jonathan Thonon on CRG-Maxter is now third thanks to his overall 8th place in final 1. The other CRG-Maxter driver, David Forè, placed tenth, penalized by a start position which was moved back because of the ten-second penalty got by the Italian driver in the first heat, where he placed first. Arnaud Kozlinski placed 12th, finishing a hard-fought race.
In KF3, the CRG champion Max Verstappen confirmed to be a top driver. In the four Saturday heats he got a win, a second and fourth place. In the pre-final and in the final on Sunday the Dutch driver is definitely the favourite and ready to win for the second time in a row the WSK Euro series title. In the same category, the Japanese Jinya Yamakawamade progress with his excellent sixth place in the time trials, but in the heats he was slowed down by several accidents.
All results on www.wsk.it