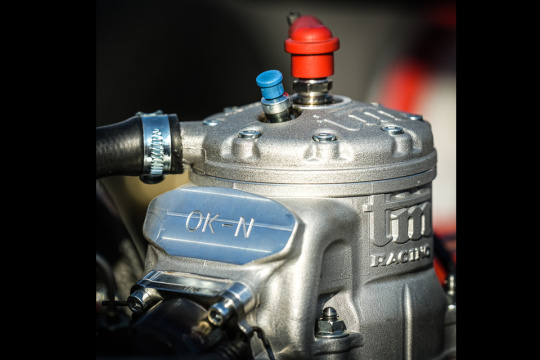 Press Release by: FIA Karting
It has been talked about since the beginning of the OK-N project, and the OKN-Junior is now a reality. Full-scale tests have enabled the CIK-FIA to validate the definition of the OKN-Junior engine to extend the OKN's field of action to younger drivers as easily as possible, with a simple exhaust flange. A single engine unit can therefore power drivers in both categories of the most accessible competition offered by the CIK-FIA for national markets.
Two engines in one
A simple and economical solution has been chosen for the Junior version of the OK-N. A 26 mm flange on the exhaust differentiates the OKN-Junior from the senior OK-N. The engine itself is strictly identical, as well as the carburettor and the exhaust system. At the age of fifteen, OKN-Junior drivers only have to remove the flange to switch to OK-N and continue their ascent.

A true pyramid of national karting
The CIK-FIA is therefore setting up a coherent technical and sporting framework for karting competition in every country. Mini, OKN-J, OK-N and KZ2 offer a complete range of categories from the age of eight upwards to enable the greatest possible number of drivers to compete in national championships with reasonable and controlled budgets. This perspective in no way prevents the National Sporting Authorities that already organise championships in the OK and OK-Junior categories from continuing to do so with these more internationally-oriented categories.

An open market that will regulate itself
The CIK-FIA's vision of affordable karting includes opening up the market to all OK-N engine manufacturers in order to ensure healthy competition in the sale of both new engines and spare parts. The self-regulation of a competitive market will guarantee the best prices for competitors.

A well thought-out racing format
The technical definition of OK-N engines is not the only element designed to reduce expenses. The CIK-FIA has also reviewed the format of competitions, recommending that organisers reduce race weekends to a maximum of two days in order to reduce costs and return to the origins of karting. The race weekends will therefore be reduced to a maximum of two days. As a reminder, and in the same logic of cost reduction, the 2024 World Cup will be based on sporting and technical regulations allowing only one chassis, one engine and one and a half sets of tyres.

An international enhancement
While the first FIA Karting World Cup - OK-N has been announced for 2024, the CIK-FIA, in collaboration with the Italian National Sporting Authority, is proposing an international competition for this new category from 2023. This event will be organised alongside the FIA Karting World Championship - OK and OK-Junior in October 2023 in Franciacorta (ITA). Grouped in a specific paddock, the OK-N competitors will be completely integrated into this major world event and will benefit from extensive media coverage. This race with authorised foreign participation will be accessible to all without prior qualification and will open up the possibility of obtaining five tickets for the 2024 World Cup for the top three drivers and two other drivers drawn from the finalists.

Italy at the forefront of OK-N
As a country with a large share of the karting industry, Italy is also leading the way in the launch of OK-N. ACI Karting has already incorporated OK-N and OKN-J into its national championship for 2023, while other organisers are following suit. While eyes will inevitably turn to the Italian Championship to see the potential of the OK-N, other countries are also preparing to introduce the new category into their national competitions.