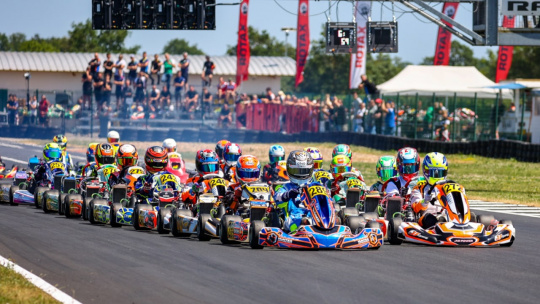 Mini MAX
The Minis once again turned on some of the closest competition for the race fans over the weekend. Taking the honours in qualifying and every race, Boaz Maximov (Bouvin Power - Tony) remains the leader in the newly-revised category for 9 to 12-year-olds, but it was not without some exciting racing in the finals. The Dutch driver’s closest rival in France was ultimately Toms Strele (Dan Holland Racing - LN), the Latvian constantly swapping places for P1 as the laps wound down on Sunday. In Final 1, Zain Elhommossany (UAE - KR) just beat the round 1 pole-sitter Paul Schoen (54 Squadra Corse - KR) to the line, which was not the case in the dash to the flag in Final 2 where it was nose-to-tail action until the last lap as well. Maximov holds a clear 28-point lead over Schoen, who also won his entry ticket to the RMC International Trophy in Le Mans to join the winner in July, and Strele 3rd.

Junior MAX
After qualifying down the order a little, championship leader Ethan Jeff-Hall (Strawberry Racing - Tony) fought his way back to start on the front row in Final 1 alongside Austin Lee (JJ Racing - Exprit), which is always going to give the young Brit a huge advantage – if we look at his race record. He may not have been the fastest, but he was unbeatable in both Finals to push his lead to be on 95 points after four races in total. Fellow countryman Scott Marsh (Dan Holland Racing - LN) still remains in 2nd at the halfway mark of the season after his excellent P2 in the first final ahead of Enzo Bol (SP Motorsport - KR). The Dutch Junior was impressive this weekend though, compared to the initial round in Genk back in April, Bol took P2 from Marsh in Final 2 to finish on equal points and secure the second step of the podium. It was a disappointing weekend for Jeff-Hall’s teammate Vinnie Phillips, but he stays in 3rd position ahead of Lee and Bol, both with 37 points.

Senior MAX
Starting from pole in the Final 1, Kai Rillaerts (JJ Racing - Sodi) was uncatchable for the entire 18 laps and extended the gap to more than two seconds by the chequered flag. Fastest qualifier Jason Leung (KR Sport - Kosmic) dropped from P2 to P4 when he came under fire from his teammate and series’ leader Sean Butcher and soon after, Mathilda Olsson (Strawberry Racing - Tony), the former double RMC Euro Trophy champion. But it was the Swedish lady who stole the show in the second final, setting the best lap and taking victory over Rillaerts to be runner-up to the Dutch champ on the day. The pace-setter from the previous race Kai Hunter (Dan Holland Racing - LN) finished P3 ahead of Butcher, who was 3rd overall and lost his championship lead to Rillaerts to trail by just three points. In the day result, Hunter was 4th to Callum Bradshaw (Strawberry Racing - Tony) who was P5 in both finals, and they are ranked the same in the standings behind Olsson, who’s moved up to 3rd.

Rotax DD2
In the 2-speed gearbox class, Mark Kimber (Strawberry Racing - Tony) continues to dominate the field and retain his lead in the series by 41 points over RMCGF 2019 champion Petr Bezel and his KSCA Sodi Europe teammate Philipp Moitzi running in 3rd. The current Rotax Senior MAX title-holder from the Grand Finals in Bahrain won both finals Sunday while setting almost equivalent best race laps, and claims that he is really enjoying the change to be competing in the DD2 this year against all these experienced drivers. In Final 1, Mathias Bjerre Jakobsen (RS Competition - Tony) got the better of early top 3 place-getters Xen de Ruwe (SSC Sportstil – Tony) and Martijn van Leeuwen (Schepers Racing – KR) to finish P2, then took P4 in the afternoon race, which gave him a single-point lead over the Rotax DD2 #1 Van Leeuwen at the end of the weekend for 2nd overall. In Final 2, Grand Finals 2018 DD2 winner Paolo Besancenez (BirelArt) split Kimber and Van Leeuwen for P2, yet missed out by only one point to the Dutch star for the last podium place.

DD2 Masters
The RMCET Winter Cup champion from February hit the spotlight once again in France, winning both finals to secure the round 2 victory. Lithuania’s Martynas Tankevicius (Lenktyniu Linija - BirelArt) managed to prevent the series leader Denis Thum (Kraft Motorsport - LN) from continuing his successful winning run in the title campaign that began at the first round in Belgium, although the pair each posted best race laps on Sunday. Well-known RMCET master Michael Becker (Compkart) was having his own battle with Thierry De Jong (Kosmic) for the podium, the German taking P3 in Final 1, but falling victim to the Dutchman in Final 2, who took 3rd place overall; albeit on equal points. Becker still has the upper hand in the standings ranked 2nd after Thum, with De Jong in 3rd just one point ahead of Tankevicius and event pole-sitter Carl Cleirbaut (SP Motorsport - KR) is 5th.

Rotax Project E20 Senior
The E-Kart grid was packed with a great line-up of experienced drivers as well, headed by the strong British duo of National Senior Champion/now race team boss Rhys Hunter (Sodi) and former DEKM and Rotax leading driver Bradley Barrett (Sodi Vitesse – Sodi). Hunter, who poled last season in every international event he entered in Europe and the British Karting Championships as well, won the first of the finals from start grid 1 in the Rotax Project E20 Senior class. Opting to keep his new MOJO D5 tyres for Final 2, Bradley Barrett passed Hunter in the early stages to take the victory and the round win, together with the great prize for another ‘Arrive & Drive’ race on the E20 calendar this year. Austria’s Nino Riepl improved consistently from the start of the weekend to finish in P3 in both finals and on the podium, with an added surprise at the presentation when he won the draw to compete in another E20 event too. In P4, it was Fabien Mihoub followed by one of the 2021 DEKM front-runners, Luca Nieuwenhuizen. Round 1 winner Luca Koester leads the standings by a slim 4 points over Eric Le Moine, the fastest qualifier from the event in Belgium. Hunter and Barrett are equal on 40 then Ellis Spiezia ranks 5th just 5 points behind with one round remaining to decide the champion.

Rotax Project E20 Junior
The newly-introduced E20 Junior class showed how easy the younger competitors adapt to the latest technology in karting, with some very nice racing and lots of overtaking during every race. Kacper Turoboyski (Bambini Racing - Sodi) kept up the momentum after qualifying on pole and winning all his heats, to win Final 1 in a close fight to the line with Ollie Wise (Sodi). The initial winner, also from Poland, Franciszek Cegielski (Sodi) received a front fairing penalty, but was the quickest overall on Sunday. In P3 was championship leader Thijs Stevens (Sodi), who later won Final 2 and collect maximum points as the winner in France with a commanding lead in the standings. Cegielski was up there again in p2 ahead of Wise who placed 3rd on the podium, while Tom Langlois was 5th. In 4th, Turoboyski ranked 2nd on the day and is P2 in the series with Tijs Daems currently in P3.

The third round of the RMCET will see a return to Belgium where the Karting Des Fagnes circuit in Mariembourg makes its popular debut on the Rotax European series calendar in 2022 from July 8-10.

More details about the RMCET 2022 series together with all the links to the full results and the race videos from the RMC Euro Trophy at Val d’Argenton are available on the official event homepage - www.rotaxmaxchallenge-eurotrophy.com 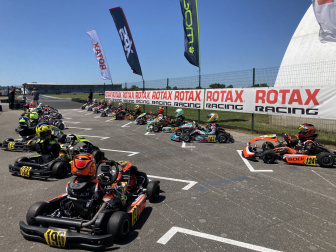