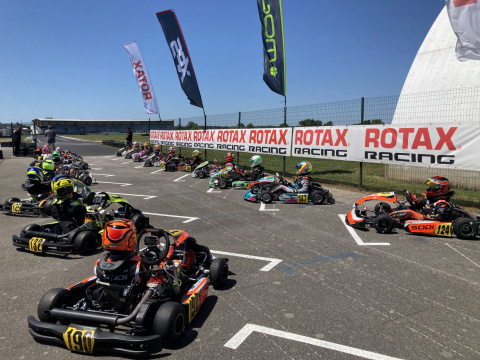 Author: Vroomkart International
The first stage of the weekend at the Val d’Argenton circuit has already determined the various grids for the Finals taking place Sunday. In addition to the five Rotax MAX engine classes, the new Project E20 Junior plus the E20 Senior categories reach their mid-series point in the season.
Mini MAX
Current championship leader Boaz Maximov (Bouvin Power) turned the tables this time around on the initial event pole-sitter Paul Schoen, setting a best lap of 55.431 to be 0.069 seconds quicker than the Swiss driver. Another front-runner this season, Toms Strele (LAT), was third fastest on the day. When it came to the heat racing, Maximov was clearly not going to lose his advantage, taking a clean sweep of the three races to be starting the first of the finals from P1. UAE Mini entry Zain Elhommossany ranked P2 ahead of Toms Strele, both sharing 2nd place finishes, while Schoen and Felipe Reijs ended up on equal points for the top 5.

Junior MAX
A superb lap [51.964] surprised Gustavs Usakovs (GBR) somewhat, running in the Dan Holland Racing team awning seeing that his regular team boss is racing in the Project E20 class in France, narrowly edging out Germany’s Austin Lee by 0.018 seconds to be starting on grid 1 in the heats. The times were incredibly close at the top of the timesheet, with Enzo Bol ranking third. The Dutch driver then went on to take the honours in the initial heat and eventually rank third, but it was Lee who conquered the following two races to secure pole Sunday. Kasper Schormans and Karel Staut were the two drivers who finished in 2nd place, although their remaining results prevented them from a better ranking. It was no surprise that the championship leader and RMCET Winter Cup winner Ethan Jeff-Hall was consistent in the racing to came through to rank P2, after starting from eighth on the grid. Usakovs and Scott Marsh were equal on 18 points following the heats to be 4th and 5th.

Senior MAX
It proved to be an excellent quali for the 17-year-old Canadian Jason Leung [50.823] from KR Sport to beat his nearest rival in Group 1, Janne Stiak, by the closest of margins - just 0.001 seconds. In Group 2, 2021 Junior Euro champ Kai Rillaerts was fastest, which gave the Dutchman P2 in the total list in front of the German, while Kai Hunter was second quickest in the session to rank fourth. Topping the Saturday afternoon’s rankings, Rillaerts won two of his races and took a 3rd place to be on pole for Final 1. Leung and defending title-holder Callum Bradshaw had exactly the same results with a victory and two 2nd places to be P2 and P3 in the ranking behind the Belgian. The other race winners were Kai Hunter and Mathilda Olsson, each with top 4 results to be in 4th and 5th overall.

Rotax DD2
Mark Kimber (GBR) kept the good pace he found in the practice to secure pole position with 50.363. The Strawberry Racing driver is definitely excelling in the 2-speed category, leading the series and starting the weekend off in fine form. Second fastest lap was set by the Dane Mathias Bjerre Jakobsen and with third best time, it was the Rotax DD2 champion from the RMC Grand Finals 2018 in Brazil, Paolo Besancenez. Kimber took a hat-trick to win all three heats and set himself up perfectly for Sunday’s Final 1. With two times 2nd and a 3rd place, Besancenez moved up to P2 ahead of Bjerre Jakobsen, who had a 2nd, 3rd and 5th. Rounding out the best 5 and also on equal points, the very experienced pairing of Xen de Ruwe and current Rotax DD2 World #1 Martijn van Leeuwen will start on the second and third row respectively.

DD2 Masters
The competition was amazingly close for the prime grid position in the DD2 Masters, with a gap of only 0.002 seconds between SP Motorsport’s Carl Cleirbaut (BEL) with 50.987 and the Italian Claudio Pagliarani. And only 0.008 seconds in arrears, it was French driver Christophe Capitaine for P3. The qualifying races brought out the elbows, showing the depth of the field at this level and confirming that the finals would be tough. All top three places were shared amongst three drivers and led by yet another RMCET Winter Cup 2022 champion, Martynas Tankevicius, with a double victory and a 2nd. Round 1 winner Denis Thum is hoping to maintain his series lead and lines up on the front row beside the Lithuanian, while pole-man Cleirbaut just a point behind in the ranking after the heats is P3. Following this, it’s Michael Becker and Pagliarani next on the grid for the first of the finals.

Rotax Project E20 Senior
Making his first appearance in the E-Kart, Senior British Champion Rhys Hunter [52.690] set the pace in the qualifying session as he takes a break from his race team responsibilities at Hunter Motorsport this weekend to enjoy something a little different and experience the Rotax Project E20. Second best lap was one of last year’s leading drivers in the E20 Luca Nieuwenhuizen (NED) followed by the UK’s Bradley Barrett third quickest, who previously competed in the Rotax Thunder E-kart DEKM series. Hunter kept his pole position after the completion of the heats with a P2 for his first ever standing start and two victories in the last two races. Barrett won the first heat which meant he would swap places with Nieuwenhuizen in the general classification, making it an all-British front row for Final 1. Local French driver Fabien Mihoub kept Ellis Spiezia at bay in the rankings for P4, both of the seniors running inside the top 5, until an incident in the last of the heats. Austria’s Nino Reipl and pole-sitter from the Genk round in April, Eric Le Moine, finished on 19 points as well, the same as USA’s Spiezia.

Rotax Project E20 Junior
After competing at the first round of the RMCET in Genk, Belgium, Kacper Turoboyski has returned to the Junior E20 grid for some more fun in the E-kart. The young Polish driver clocked the fastest time [52.764] in qualifying to take P1 ahead of British driver Ollie Wise and Tom Langlois (FRA). Turoboyski’s weekend continued to go his way, winning all three heats to rank P1, while the winner from the opening Genk RMCET, Thijs Stevens, claimed 2nd place in each of the races behind him. It was the leader’s best friend Franciszek Cegielski who drove well to rank third, only a point separating him from Wise and Langlois sits fifth. The winning E20 drivers in both classes will once again win a free ‘Arrive & Drive’ race package to compete at another of the scheduled E-Kart events this season.

More details with all the links to the full results, live timing, livestream coverage and all the race videos from the RMC Euro Trophy at Val d’Argenton are available on the official event homepage - www.rotaxmaxchallenge-eurotrophy.com 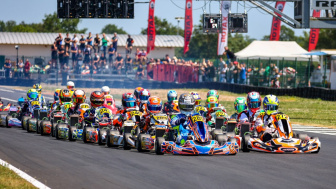