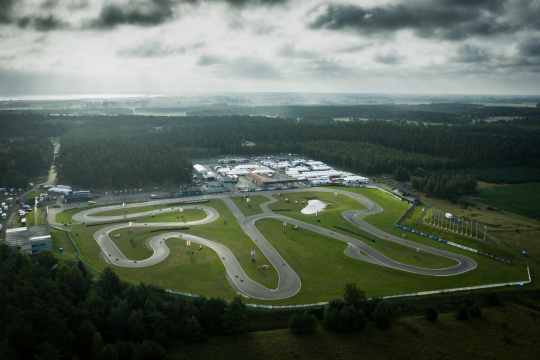 Press Release by: FIA Karting
The third of the four events in the FIA Karting European Championships - OK and OK-Junior, Sweden will be an important stage in the conquest of the titles from 2nd to 5th June 2022. The lead taken in Kristianstad will ensure a clear advantage as only the three best results (after the Super Heats and Final) are taken into account for the ranking. Sweden is also enjoyed for the quality of its welcome and its organisation.
On the FIA Karting calendar since 2014, despite the interruption in 2020 caused by the pandemic, the Åsum Ring is one of the must-see circuits for top-level competition. While drivers and teams love the event, they don't underestimate its difficulties. The 1,221 m long circuit is already very selective with its many overtaking zones. The closeness of the Baltic Sea means that the weather can change rapidly and showers can make the races even more uncertain. In any case, the spectacle is guaranteed and a public of enthusiasts usually fills the grandstand and the circuit perimeter to enjoy it.
The field promises to be large thanks to the presence of numerous wild cards, and 44 nations are entered. The conclusion of the two Championships will take place a month later, from 7th to 10th July in Italy on the new Franciacorta circuit.
Advantage for Nathan Tye in OK-Junior
The competition is very open in OK-Junior. The British driver Nathan Tye has already won in Spain and seems to be able to play a leading role in Sweden as well. Dmitry Matveev, who was very fast at the beginning of the season, has had some problems since then, but still has a lot of potential. The young Dutch driver René Lammers is still very close in third position, whereas the French driver Jules Caranta and Thailand's Enzo Tarnvanichkul are both in a rapid ascent. The chances of Lucas Fluxa Cross (ESP), Maxens Verbrugge (FRA), Guillaume Bouzar (LUX) or Anatholy Khavalkin should not be overlooked.
Provisional 2022 FIA Karting European Championship - OK-Junior standings before Round 3
1- Nathan Tye (GBR) 53 points
2- Dmitry Matveev 39 points
3- René Lammers (NLD) 38 points
4- Jules Caranta (FRA) 29 points
5- Enzo Tarnvanichkul (THA) 26 points
OK: Joe Turney in a good position
With his 70 points, the British Joe Turney has scored the maximum points so far in the two previous events. Fast in the dry as well as in the rain, well armed against stress thanks to his long experience, he has undeniable assets against his young opponents. Very close in the provisional ranking, the Frenchman Enzo Deligny and the British driver Kean Nakamura-Berta are far from having given up all hope of winning the European title. The victory is a possibility for a wide range of talented drivers among whom Evan Giltaire (FRA) and Ean Eyckmans (BEL), the Brazilians Matheus Morgatto Alvarenga, Matheus Ferreira and Gabriel Gomez, Finland's Juho Valtanen, Luka Sammalisto and Tuukka Taponen, Luigi Coluccio (ITA), Arvid Lindblad (GBR) already on his way to single-seaters, and Lorenzo Travisanutto (ITA) who will be making his return for a race in OK on the track where he won the FIA Karting World Championship in 2018.
Provisional 2022 FIA Karting European Championship - OK standings before Round 3
1- Joe Turney (GBR) 70 points
2- Enzo Deligny (FRA) 42 points
3- Kean Nakamura-Berta (GBR) 40 points
4- Evan Giltaire (FRA) 32 points
5- Ean Eyckmans (BEL) 31 points