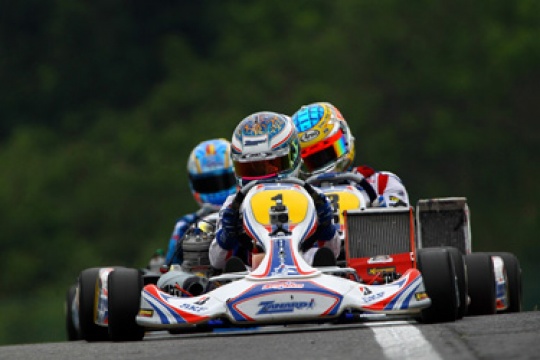 It is the long (1,700 m) international circuit of Zuera, located in the north of Zaragoza in Spain, which will have the distinguished honour of gathering the upper crust of Karting’s young hopefuls and the greatest teams of this form of sport on 17-19 September. In all, 29 nations will be represented.

The attention paid to young Drivers is in particular illustrated by an expected confrontation between the Drivers of the Mc Laren Young Driver Development Programme, Nyck de Vries (NLD) and Oliver Rowland (GBR), and those of  the Ferrari Driver Academy, Raffaele Marciello (ITA) and Brandon Maisano (FRA). Out of those four, the Dutchman Nyck de Vries will be the one on whom all eyes will turn. CIK-FIA European Junior Champion in 2009 on this very circuit of Zuera, the diminutive 15 years old prodigy has overshadowed all the big names and recognised talents of Karting in all the international non-championship competitions he has entered since the beginning of the season.

The entry list is so long and rich in talent that it would be risky to launch into any forecasts. Judging by their recent performances, it will in particular be worth following the evolutions of Denmark’s Moller Madsen (European KF2 Champion in 2010), Kevin Munkholm and Jakob Nortoft, of the Portuguese David Da Luz (winner of the World Cup for KF2 in 2009), of the Belgians Sébastien Bailly and Guillaume de Ridder, of the Finn Teemu Suninen, the Japanese Yu Kanamaru, the Italians Matteo Vigano and Ignazio D’Agosto, the Australian Gilbert Mitchell, the Britons Jordan Chamberlain (European KF2 Champion in 2009) and Alexander Walker, as well as the Swiss Michael Heche. The field will nonetheless comprise some very experienced Drivers who could prevail in the face of the stakes: Britain’s Ben Hanley, Belgium’s Yannick de Brabander and Finland’s Simo Puhakka to name but a few. Finally, three Scandinavian Drivers will represent the fair sex: the Dane Michelle Gatting (third in the Asia-Pacific KF2 Championship last May in Japan), the Norwegian Ayla Agren and the Finn Laura Koivuluoma.

Each competition day in Zuera will correspond to a major stage of this 47th CIK-FIA World Championship: on Friday evening there will be an initial hierarchy further to qualifying practice. On Saturday, after the 12 qualifying heats, the 34 happy Finalists will be known. And on Sunday the result of the morning prefinal (9h55) will condition the starting grid of the big final scheduled for noon. Those who will not be present at the Zuera track can watch the race live from 11h45 on Eurosport, which will broadcast it on its international channel. Not forgetting that throughout the weekend the results will be published in real time on www.cikfia.com.