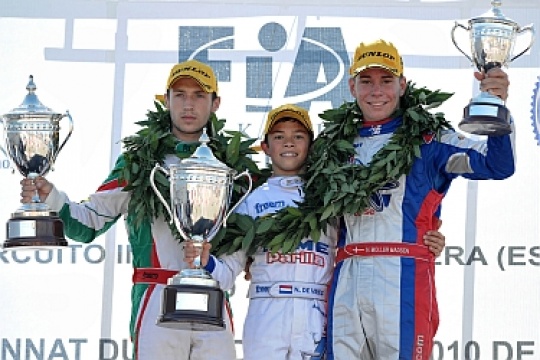 Nick de Vries made his incredible attack on Chamberlain on the last lap, at the only point where he could have taken his rival by surprise to grab championship win. A fantastic attack that left everyone dumb-founded. After dominating throughout the race, Chamberlain, only a step away from the title, which he deserved to win when … Photos CIK-FIA /KSP

He looked back for the first time on the last lap while racing along the long straight towards the finishing line…then the attack came at De Vries’ favourite point. Chamberlain made a mistake in calculating the distance, as it was quite a lot (4/5 metres?) he entered the braking area, perhaps, with too much non-chalance, not closing the gap. While De Vries pressed hard as though he was never going to turn and came up on the inside of Chamberlain who reacted instinctively and ended up making things even more difficult when he went off the track. That’s how he came to lose the world championship title. Chamberlain managed to hold back Moller-Madsen, another protagonist of this world championship filmed by Eurosport cameras. What a world championship final, excitement abounded through to the last lap. But tension rose… the trio, Chamberlain, De Vries and Moller-Madesen kept the lead throughout the race at a fantastic pace…But tension increase as the race drew to an end, because each of them were more and more determined to win as they lapped at top speed towards the chequered flag. No mistakes… Each lap seemed to be a photocopy of the previous one… no one would have imagined such an ending. With his incredible attack, De Vries took the leader and grabbed the win, leaving an indelible mark in this edition of the championship. He’s the only one who made the difference.