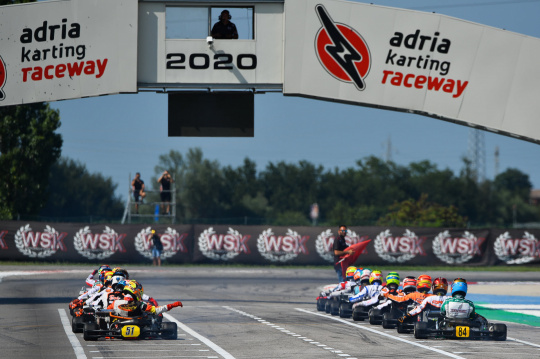 Author: Vroomkart International
On the Adria circuit, the WSK opens the doors of the Open Cup 2020, double weekend of the season marked by COVID.
After having filed Super Master Series and Euro Series, the WSK is ready to restart for the last events of the year with the Adria Open Cup. A double weekend once again that will see the four categories facing each other until Sunday 29th, a day that will reveal the winners.

A golden opportunity that will be exploited by many in 2021 with numerous category changes, some team changes and above all the last "efforts" to close the season definitively. So much the show that will garantee in 60 Mini more fierce than ever, practically identical speech for the Junior, fresh from the World Championship in Portimao as well as the Senior albeit with some new or unpublished names.

Also in KZ2 an interesting, albeit reduced, entrylist is preparing to take to the track after the recent World Championship in Lonato. The weekend will be structured as usual starting tomorrow with the double qualification valid for the first and second round. The programme will then move on to Thursday and Friday with the programme of heats, Saturday the double pre-finals and Sunday the final races.