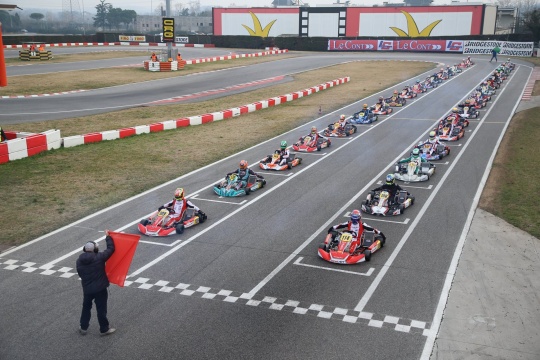 Author: Vroomkart International
Another round, another race for the WSK season. The double round of Adria filed away, it is up to Lonato to host the title fight.
Unlike the first two races scheduled, the second round Super Master Series, the third appointment of the complete WSK season also includes the debut of the KZ.

60 Mini - Attack on Russian power
As already mentioned, the class of the youngest drivers, this season would seem to be the preserve of the Russian drivers. Here, then, they will start again as favorites, especially after the double podium formed by Gerasim Skulanov (Formula K) and Anatoly Khavalkin (Parolin), ready to defend the leadership again. Eyes also on Dmitry Matveev (Energy), Rashid Al Dhaheri (Parolin) and Gladysz Maciej (Parolin) in addition to Tony Kart officials, such as Helias and Sorensen, not to mention the CRG All Blacks, the Gamoto and Baby Race drivers.

OKJ – Again the Hunt for KR
With two out of two wins, Alfio Spina (KR) is the man to beat for this weekend. Thanks to two triumphant drives, the Sicilian is among the most visible and most promising drivers of this season start. In addition to Spina, KR will be able to rely on Arvid Lindblad, also very positive and, above all, at ease in close combat; not to be underestimated also Cristian Ho (Sauber Karting Team), and a revelation of past weekends such as Martinius Stenshorne (Rosberg Racing), the last winner of the Winter Cup. Also obviously aiming to take down the Kr amada are Tony Kart drivers like Karol Pasiewicz, already on pace in Adria, Cristian Bertuca skilled in the comebacks of the center group, and Tymoteusz Kucharczyk for the Lissone-based Birel Art.

OK - Hiltbrand aims big again
In the first official outing, Pedro Hiltbrand returned to shine with the Tony Kart colors by winning on a comeback in the first race of the season. The Spaniard showed he is still hungry for success and will try to do an encore, bringing his teammates Turney and Travisanutto with him, on the podium last week, always in Lonato. In the case of the Senior, KR will function as a major antagonist with Taylor Barnard (Rosberg Racing) constantly in the upper zone, followed by Enzo Trulli (KR) and Andrea Kimi Antonelli (KR). The Dutch Van T'Hoff (Forza Racing) is definitely looking for redemption in search of his first success, the same for Kirill Smal (Energy), a competitive but often impetuous and collector of penalties for the front spoiler.

KZ2 - Who'll be the first King?
KZ2 is greatly waited for, too, this race weekend with the first race of the season and the debut of many big names in the category. According to the results of the past season, spotlights aimed at the winners of the FIA ​​competitions where, of course, Birel Art stands out with Longhi, Palomba, Irlando, Marseglia and Payne. Last weekend, on the occasion of the Winter Cup, the "white-reds" already showed great competitiveness by bringing home the 1-2 with Palomba and Longhi. For the Charles Leclerc by Birel Art and Lennox Racing, Matteo Viganò, Bjamin Tornqvist and Viktor Gustavsson are ones to watch, experienced drivers ready to take home a victory. Tony Kart warms its engines relying on the eternal Simo Puhakka, Alessio Piccini and the French new entry Paul Evrard. Full, too, the CPB by Sodi entry list, besides the official driver and European Champion 2018, Adrien Renaudin (Sodi Kart). Others to watch include Pollini (NGM Mototsport), Camplese (SC Performance), Valenti (CRG), Iglesias (Formula K), Federer (SRP Racing Team), Thompson (Sauber Karting Team), Maximilian Paul (DR) and the new entry Drago Corse by Armando Filini.