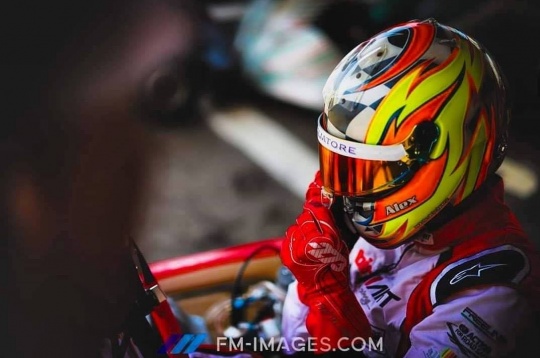 KZ2 - Birel always on top
Birel Art continues its positive streak by replicating what was seen seven days ago during the Winter Cup. At the end of qualifying it is still 1-2 for the Lissone-based team with Alex Irlando and Riccardo Longhi respectively in front for groups A and B, best lap by Irlando in 45.589 seconds. Third absolute time for the protagonist of the last race of 2019, Dougas Lundberg (Novalux), ahead for group C. Last two group pole positions assigned to the 2018 Italian Champion Giacomo Pollini (NGM Motorsport) at the first round of the season, top five for the third Birel Art driver, Matthew Payne. Illustrious second positions for Puhakka (Tony Kart) in group B and Palomba (Birel Art) in group E. First two heats during the day.

OK – Trulli, what a show
With a frenzied lap, Enzo Trulli (KR) takes home the absolute pole position for the Senior class. The Italian recorded a good 46.616, valid for the pole position of group A and first in the Kart Republic army. Behind the poleman, brand mate Andrea Kimi Antonelli (KR) replies, at the top of group B and in front of a new-found Rafael Camara (Forza Racing). The British team also smiles thanks to Dilano Van T'Hoff, always at the top in this start with the pole of the group D. Last pole by the reigning World Champion and first of Tony Kart drivers, Lorenzo Travisanutto for group E. In second place for their respective groups, a resurgent Taylor Barnard (Rosberg Racing), Nikita Bedrin (Ward Racing), Theo Wernesson (TK Racing) and Tony Kart duo, Joseph Turney - Pedro Hiltbrand.