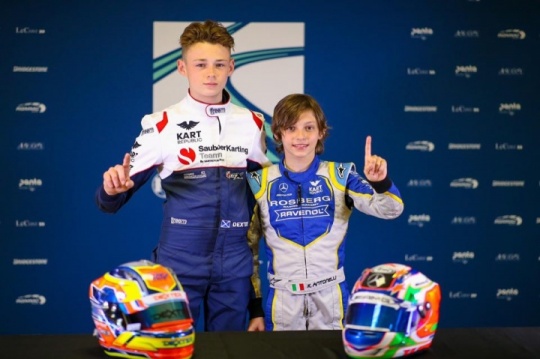 Author: Vroomkart International
On the Krisitanstad circuit, the third qualifications of the year are filed away with Dexter Patterson (OK) and Andrea Kimi Antonelli (OKJ) in absolute pole position.
Sweden does not betray expectations by giving a qualifying session that was hard-fought in both categories.

OK - Patterson starts from the best time
In Senior, Dexter Patterson still a monopoly with the Scotsman able to stop the clock at 50.328, best absolute time and pole for group A. Behind him, the fight for the title lights up with Lorenzo Travisanutto literally attached to his rival with only +0.011 sec of a gap and the pole position of group B. Gabriele Minì returns to great form in Sweden with the third best time just behind the front duo; the remaining poles by Dino Beganovic, Axel Saamiala and Kirill Small lead groups D, E and F. Second positions for Coluccio in group D and Barnard in group C. Further behind are the CRGs with Hiltbrand third in group B and Bortoleto fourth in C. Appointment tomorrow with the heats for all groups starting at 10.45 am.

OKJ - Antonelli at first European pole
Andrea Kimi Antonelli steals the show at the top of the general with the absolute pole position in 52.247. The Italian has well exploited the qualifying session, managing to establish himself on a rediscovered Tuukka Taponen, back on top with the second place at +0.062sec from his rival. As for the outsiders, the Polish Karol Pasiewicz astonishes with the third best time, poleman for group C. The first group positions are closed by Theo Wernersson, Kajus Siksnelis and the first of Tony Kart drivers, Nikita Bedrin, respectively in pole for groups D , E, F. Good day also for Birel Art with the pole positions in the respective series for Rafael Camara and Cristian Bertuca, both excellent seconds for the B and D groups. Second place also for Amand (gr. C), Dunne remain behind and Ten Brinke, in the third and fourth place of their respective groups. Direct heats scheduled for 09.45 tomorrow morning, ie Saturday 1 June.