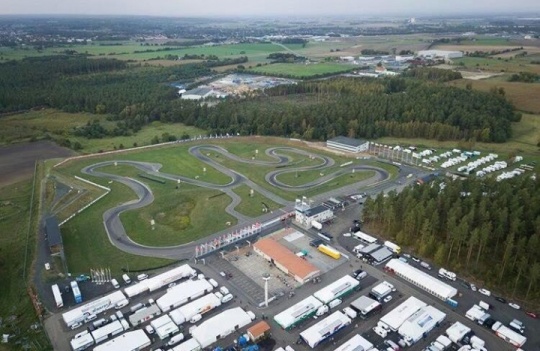 Author: Vroomkart International
On the Swedish karting track in Kristianstad, the third of the scheduled four OK and OKJ European Championship races are on this weekend.
The Asum Ring returns to the karting scene after hosting the 2018 World Championship, won by Victor Bernier (OKJ) and Lorenzo Travisanutto (OK).

OK - Patterson vs Travisanutto, brand in-house duel
After filing away Angerville and Genk, the leading class of the direct drive reaches its moment of truth with the in-house challenge between brand mates Lorenzo Travisanutto and Dexter Patterson. The Italian triumphed dominating in Genk, throwing a clear signal to his rival, still first in the standings, thanks also to the second place obtained in Belgium after the victory at Angerville. The Scotsman starts as a favorite but with only 15 lengths ahead of the Italian, expert of Kristianstad and World Champion last year. Between the two rivals, there will be other drivers aiming to spoil the party starting with Dino Beganovic, the surprise of Genk with his third place and overall performance; also expected, Minì, second in the Junior World Championship 2018, and Dilano Vant'Hoff one step away from the podium but subsequently penalized in Belgium. Among the others, CRG's hopes are placed in Pedro Hiltbrand and Gabriel Bortoleto, fast and competitive in the last weekend but unlucky in the decisive moments.
OKJ - Ten Brinke, mission: success
Fresh from a second event, fortunate but constructive, Thomas Ten Brinke finds himself leading the general classification but without victories. Score positive but dangerous for the Dutch driver, called upon to succeed in Sweden to put a serious claim on the Title, given also the setback by Taponen in Belgium. Ten Brinke will have to pay attention to Marcus Amand, the new pretender to success with the team that precisely in Sweden became World Champion with Bernier last season. The Frenchman, now second in the standings, will try to repeat the victory with a special eye on the Tony Kart duo, Dunne-Bedrin, fiercer than ever after the monopoly of the front row of the grid, at the end of the Genk heats.

Appointment tomorrow, Friday 31st with official qualifications. The program will then move to Saturday with the heats, archived Sunday morning before the category finals.