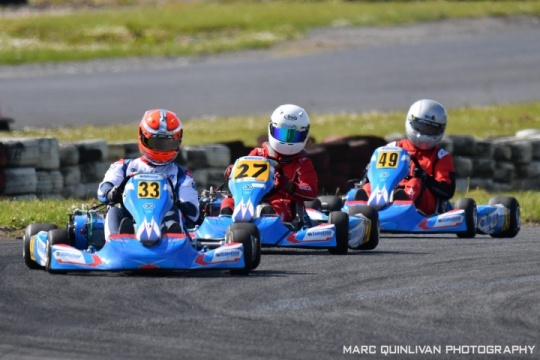 Author: Vroomkart International
On the weekend of May 26th, the Tillotson T4 mono-brand series will be back on track for the launch event as part of the Motorsport Ireland Championship held at the Whiteriver Karting Complex.
As already mentioned in our magazine, the innovative mono-brand series is a new way of conceiving karting at affordable prices but with high-end performance. The T4 category allows drivers from the age of 15 onwards to participate and has gained great feedback and momentum after the first outings. It is now time to expand even more with this weekend's launch event.

For the occasion, Tillotson has proceeded to expand the entry list of the participating drivers by inviting a few guest stars in order to further enrich a category that is about to become a staple.

TECHNICAL INFORMATION
In the T4 Series single-brand, the T4-C1 chassis was specially designed as was the Tillotson 225RS engine, thereby offering an “old-style” vision where, taking advantage of the same technical conditions, the driver's skill, talent and competitiveness shall be decisive.

RACE WEEKEND
Sunday will be the event's focal point with the races starting at 11.00 am with free access to all spectators and interested parties of the new project. Let us remind you that Vroom Karting Magazine will be present at the event. We therefore invite you to follow the social network channels of Tillotson Racing and Vroom to experience the T4 Series experience with us.

GUEST STARS OF THE EVENT
Niall Quinn (Ireland): One of Ireland's most decorated karting drivers, Niall won national Championships in Cadet / JICA / Formula A. He carried his success into racing cars and was part of the Junior Red Bull team in 2006. Victories includes Audi Autumn Trophy 2008, Champion Formula Palmer, and Niall was part of the Ireland A1GP team in 2008/2009.

Cheryl Murphy (Ireland): Cheryl is a well-known Irish kart racer who competed at Cadet / Junior / Senior levels for many years. She is making her return to the grid while representing the Formula Female Project under the guidance of Irish Hockey star Nicci Daly. Cheryl will be first female competitor to race in the Tillotson T4 Series.

Felipe Braga (Brazil): Brazilian driver Felipe is the Owner of Veloz Racing. A permanent figure in the International karting paddock Felipe works with and manages many young drivers at the highest level. The previous North Brazilian Kart Champion still actively races in Worldwide 4-stroke races such as the Brazilian 4-stroke championships which he has won in recent years.

Mikko Laine (Finland): Mikko is currently involved in many aspects of the sport. The Iame Series Finland / Baltic Challenge promoter also regularly competes at International events. He has a long and successful racing career spanning over 20 years winning multiple Finnish National Championships and Cup races. Mikko has raced many categories and his career highlights include victories and podium finishes at Iame / Rotax International Finals.

Paul David (France): French KZ driver Paul still competes at the highest level of French National and International karting. He has been involved in karting for many years as a driver and recently as coach for young European talents. Paul's achievements include victory and podium results in multiple French National Championship and Cup events.