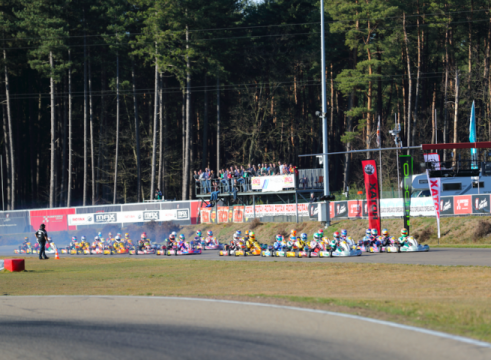 Author: Vroomkart International
The 2019 racing season of BNL is ready to start.
This weekend sees the true starting point for the BNL Karting Series for its 11th year of racing, as the "Home of Champions," Belgium's Karting Genk, plays host to over 160 drivers, with 14 different nations being represented over the eight categories set to go into battle.

With both the Junior and Senior ROTAX classes being sold out weeks before the event, the organisers decided to further extend this, with both classes having over 40 competitors that will battle it out to make to the top 36 drivers after the qualifying stages.

The OK and OK Junior ranks have also swelled since the Kick-Off four weeks ago, with a total of over 20 drivers taking to the 1,360-metre circuit, based in the Limburg region, whilst DD2 and DD2 Masters have also climbed in numbers as they will also compete at the same time during the race weekend duration.

This increase in total entries betters the amount of drivers that headed to those hallowed halls last November, with the BNL ROTAX Golden Trophy having 152 entries to its credit.

The prize for the eventual champions in Junior Max, Senior Max, DD2 and DD2 Masters will
see those respective winners qualify for the 20th anniversary of the ROTAX Max Challenge Grand Finals, which will take place between October 19th and 26th at the Circuito Internazionale Napoli in Southern Italy, just on the outskirts of the legend that is Mount Vesuvius.

All Micro Max runners will also start their campaigns to gain a ticket to the ROTAX Max International Trophy at the Circuit Alain Prost in Le Mans this coming August, with the best-placed driver in the class after the second race weekend at Mariembourg in July being bestowed with that great motivational prize.

All the action from the first round of the 2019 season will be audio streamed via Downforce Radio, with Camp Company GmbH providing a full video live stream for the complete weekend as it happens via YouTube.